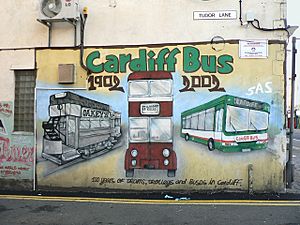 Mural on a building in Cardiff, Wales

A mural is a painting on a wall or a ceiling. Murals are usually big. They may be in public places, such as the outside of a building, or indoors. 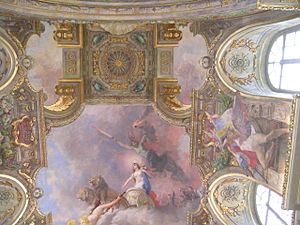 Murals of sorts date to Upper Paleolithic times such as the paintings in the Chauvet Cave in Ardèche department of southern France (around 30,000 BC). Many ancient murals have been found within ancient Egyptian tombs (around 3150 BC), the Minoan palaces (Middle period III of the Neopalatial period, 1700–1600 BC) and in Pompeii (around 100 BC – AD 79).

During the Middle Ages murals were usually executed on dry plaster (secco). The huge collection of Kerala mural painting dating from the 14th century are examples of fresco secco. In Italy, circa 1300, the technique of painting of frescos on wet plaster was reintroduced and led to a significant increase in the quality of mural painting.

In modern times, the term became more well-known with the Mexican muralism art movement (Diego Rivera, David Siqueiros and José Orozco). There are many different styles and techniques. The best-known is probably fresco, which uses water-soluble paints with a damp lime wash, a rapid use of the resulting mixture over a large surface, and often in parts (but with a sense of the whole). The colors lighten as they dry. The marouflage method has also been used for millennia.

Murals today are painted in a variety of ways, using oil or water-based media. The styles can vary from abstract to trompe-l'œil (a French term for "fool" or "trick the eye"). Initiated by the works of mural artists like Graham Rust or Rainer Maria Latzke in the 1980s, trompe-l'oeil painting has experienced a renaissance in private and public buildings in Europe. Today, the beauty of a wall mural has become much more widely available with a technique whereby a painting or photographic image is transferred to poster paper or canvas which is then pasted to a wall surface (see wallpaper, Frescography) to give the effect of either a hand-painted mural or realistic scene. 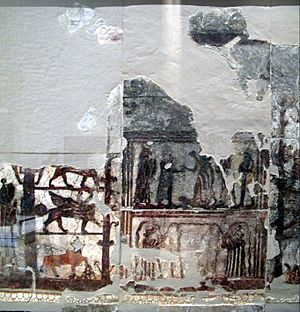 In the history of mural several methods have been used:

A fresco painting, from the Italian word affresco which derives from the adjective fresco ("fresh"), describes a method in which the paint is applied on plaster on walls or ceilings. The buon fresco technique consists of painting in pigment mixed with water on a thin layer of wet, fresh, lime mortar or plaster. The pigment is then absorbed by the wet plaster; after a number of hours, the plaster dries and reacts with the air: it is this chemical reaction which fixes the pigment particles in the plaster. After this the painting stays for a long time up to centuries in fresh and brilliant colors.

Fresco-secco painting is done on dry plaster (secco is "dry" in Italian). The pigments thus require a binding medium, such as egg (tempera), glue or oil to attach the pigment to the wall.

Mezzo-fresco is painted on nearly-dry plaster, and was defined by the sixteenth-century author Ignazio Pozzo as "firm enough not to take a thumb-print" so that the pigment only penetrates slightly into the plaster. By the end of the sixteenth century this had largely displaced the buon fresco method, and was used by painters such as Gianbattista Tiepolo or Michelangelo. This technique had, in reduced form, the advantages of a secco work.

In Greco-Roman times, mostly encaustic colors applied in a cold state were used.

Tempera painting is one of the oldest known methods in mural painting. In tempera, the pigments are bound in an albuminous medium such as egg yolk or egg white diluted in water.

In 16th-century Europe, oil painting on canvas arose as an easier method for mural painting.

Once completed the mural can be given coats of varnish or protective acrylic glaze to protect the work from UV rays and surface damage.

In modern, quick form of muralling, young enthusiasts also use POP clay mixed with glue or bond to give desired models on a canvas board. The canvas is later set aside to let the clay dry. Once dried, the canvas and the shape can be painted with your choice of colors and later coated with varnish. 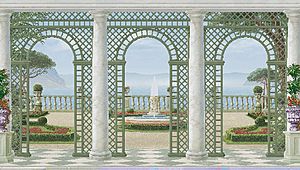 As an alternative to a hand-painted or airbrushed mural, digitally printed murals can also be applied to surfaces. Already existing murals can be photographed and then be reproduced in near-to-original quality.

The disadvantages of pre-fabricated murals and decals are that they are often mass-produced and lack the allure and exclusivity of an original artwork. They are often not fitted to the individual wall sizes of the client and their personal ideas or wishes can not be added to the mural as it progresses. The Frescography technique, a digital manufacturing method (CAM) invented by Rainer Maria Latzke addresses some of the personalisation and size restrictions.

Digital techniques are commonly used in advertisements. A "wallscape" is a large advertisement on or attached to the outside wall of a building. Wallscapes can be painted directly on the wall as a mural, or printed on vinyl and securely attached to the wall in the manner of a billboard. Although not strictly classed as murals, large scale printed media are often referred to as such. Advertising murals were traditionally painted onto buildings and shops by sign-writers, later as large scale poster billboards. 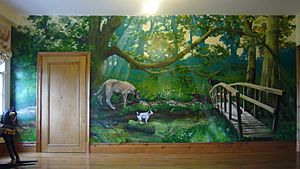 Forest mural by One Red Shoe in private home, England 2007

Many people like to express their individuality by commissioning an artist to paint a mural in their home. This is not an activity exclusively for owners of large houses. A mural artist is only limited by the fee and therefore the time spent on the painting; dictating the level of detail; a simple mural can be added to the smallest of walls.

Private commissions can be for dining rooms, bathrooms, living rooms or, as is often the case- children's bedrooms. A child's room can be transformed into the 'fantasy world' of a forest or racing track, encouraging imaginative play and an awareness of art.

The current trend for feature walls has increased commissions for muralists in the UK. A large hand-painted mural can be designed on a specific theme, incorporate personal images and elements and may be altered during the course of painting it. The personal interaction between client and muralist is often a unique experience for an individual not usually involved in the arts.

In the 1980s, illusionary wall painting experienced a renaissance in private homes. The reason for this revival in interior design could, in some cases be attributed to the reduction in living space for the individual. Faux architectural features as well as natural scenery and views can have the effect of 'opening out' the walls. Densely built up areas of housing may also contribute to people's feelings of being cut off from nature in its free form. A mural commission of this sort may be an attempt by some people to re-establish a balance with nature.

Commissions of murals in schools, hospitals and retirement homes can achieve a pleasing and welcoming atmosphere in these caring institutions. Murals in other public buildings, such as public houses are also common. 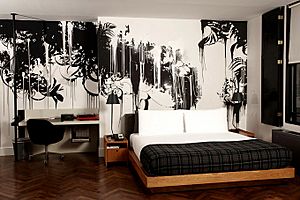 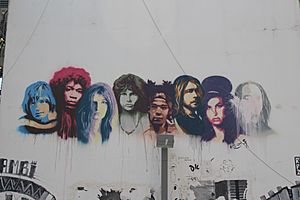 Recently, graffiti and street art have played a key role in contemporary wall painting. As graffiti/street art became more mainstream in the late 1990s, youth oriented brands such as Nike and Red Bull, with Wieden Kennedy, have turned to graffiti/street artists to decorate walls of their respective offices. This trend continued through 2000's with graffiti/street art gaining more recognition from art institutions worldwide.

Many home owners choose to display the traditional art and culture of their society or events from their history in their homes. Ethnic murals have become an important form of interior decoration. Warli painting murals are becoming a preferred mode of wall decor in India. Warli painting is an ancient Indian art form in which the tribal people used to depict different phases of their life on the walls of their mud houses. 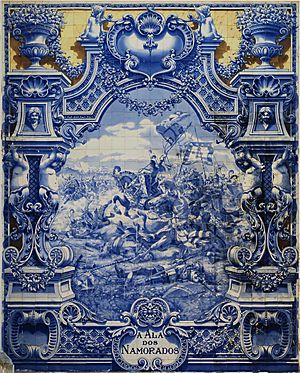 Panel of glazed tiles by Jorge Colaço (1922) depicting an episode from the battle of Aljubarrota (1385) between the Portuguese and Castilian armies. A piece of public art in Lisbon, Portugal.

Tile murals are murals made out of stone, ceramic, porcelain, glass and or metal tiles that are installed within, or added onto the surface of an existing wall. They are also inlaid into floors. Mural tiles are painted, glazed, sublimation printed (as described below) or more traditionally cut or broken into pieces. Unlike the traditional painted murals described above, tile murals are always made with the use of tiles.

Mosaic murals are made by combining small 1/4" to 2" size pieces of colorful stone, ceramic, or glass tiles which are then laid out to create a picture. Modern day technology has allowed commercial mosaic mural makers to use computer programs to separate photographs into colors that are automatically cut and glued onto sheets of mesh creating precise murals fast and in large quantities.

The azulejo refers to a typical form of Portuguese or Spanish painted, tin-glazed, ceramic tilework. They have become a typical aspect of Portuguese culture, manifesting without interruption during five centuries, the consecutive trends in art.

Azulejos can be found inside and outside churches, palaces, ordinary houses and even railway stations or subway stations.

They were not only used as an ornamental art form, but also had a specific functional capacity like temperature control in homes. Many azulejos chronicle major historical and cultural aspects of Portuguese history.

Custom-printed tile murals can be produced using digital images for kitchen splashbacks, wall displays, and flooring. Digital photos and artwork can be resized and printed to accommodate the desired size for the area to be decorated. Custom tile printing uses a variety of techniques including dye sublimation and ceramic-type laser toners. The latter technique can yield fade-resistant custom tiles which are suitable for long term exterior exposure.

All content from Kiddle encyclopedia articles (including the article images and facts) can be freely used under Attribution-ShareAlike license, unless stated otherwise. Cite this article:
Mural Facts for Kids. Kiddle Encyclopedia.