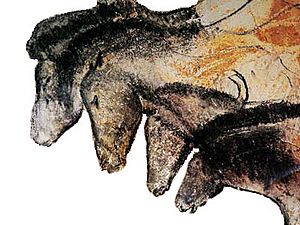 Drawings of horses from Chauvet Cave

The Chauvet Cave or Chauvet-Pont-d'Arc Cave is near Vallon-Pont-d'Arc, in the Ardèche département, in southern France. It became famous in 1994 when Paleolithic artwork was found on the walls. There were remains of many animals, some which are now extinct. Also some footprints of animals and humans were found. The cave is one of the most significant prehistoric art sites, like Lascaux, Altamira, and Cosquer.

The gorges of the Ardèche region have many caves. Many have geological or archaeological importance. The Chauvet Cave is unusually large. Its artwork is well preserved and of good quality. It was occupied by humans at two different times: the Aurignacian and the Gravettian. Most of the artwork dates to the earlier Aurignacian era (30,000 to 32,000 years ago).

The only traces left of the later occupation during the Gravettian include a child's footprints, the charred remains of ancient hearths and carbon smoke stains from torches that lit the caves. It seems nobody had been in it after the child, until it was discovered in 1994. The footprints are some of the oldest human footprints in existence: they are between 20,000 and 30,000 years old.

The floor of the cave is of a soft material, almost like clay. There are paw prints of cave bears. There are also large rounded depressions in the floor. These are believed to be the nests where the bears slept. There are many fossilized bones, including the skulls of cave bears and the horned skull of an ibex.

There are hundreds of animal paintings there. At least 13 different species, including those which have rarely or never been found in other ice age paintings are represented. In addition to commonly hunted animals: horses, cattle, reindeer, etc.. The walls of the Chauvet Cave are covered with predatory animals: lions, panthers, bears, owls, rhinos and hyenas. Typical of most cave art, there are no paintings of complete human figures, although there is one possible, partial "Venus" figure that may represent the legs of a woman. A peculiar figure appears to have the lower body of a woman with the upper body of a bison. There are a few panels of red ochre hand prints and hand stencils made by spitting pigment over hands pressed against the cave surface. Abstract markings—lines and dots—are throughout the cave. There are also two unidentifiable images that have a vaguely butterfly shape to them. This combination of subjects has led experts in pre-historic art and cultures to believe that there was likely a ritualistic, shamanistic, or magical aspect to these paintings.

The artists who produced these unique paintings used techniques not often observed in other cave art. Many of the paintings appear to have been made only after the walls were scraped clear of debris and concretions. This left a smoother and noticeably lighter area upon which the artists worked. Similarly, a three dimensional quality is achieved by incising or etching about the outlines of certain figures. This visually emphasizes some of the animals and allows torch light to cast shadows about the edges.

However, some archaeologists have questioned these dates.

The cave was named after Jean-Marie Chauvet, who discovered it on 18 December 1994, together with Christian Hillaire and Eliette Brunel-Deschamps. The researchers found that the cave had been untouched for 20,000-30,000 years.

All content from Kiddle encyclopedia articles (including the article images and facts) can be freely used under Attribution-ShareAlike license, unless stated otherwise. Cite this article:
Chauvet Cave Facts for Kids. Kiddle Encyclopedia.