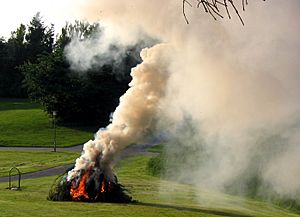 Smoke is a cloud of very small, solid particles that is made when something is burned with a flame, such as wood or paper.

Smoke can be bad because if it goes into the lungs of a person, it can hurt their lungs or even kill them (for example, in a house fire). Most people think that they are always able to see smoke, but people cannot see some types of smoke: they are invisible.

When people smoke tobacco in cigars or cigarettes, they are burning the tobacco and inhaling the smoke. Tobacco smoke can hurt the mouth, throat, and lungs. It can cause mouth, throat, or lung cancer. It can also cause emphysema and bronchitis (trouble breathing).

Factories and power plants produce large amounts of smoke into the atmosphere which pollutes the air. Eventually the toxic chemicals in smoke fall to the ground, and then they pollute the soil and the water. When the air, soil and water are polluted with toxic chemicals, the chemicals also get absorbed by plants and animals (including humans).

When Dry ice is put into water, the dry ice boils and makes fog. Movie makers and other show people use this to simulate smoke.

All content from Kiddle encyclopedia articles (including the article images and facts) can be freely used under Attribution-ShareAlike license, unless stated otherwise. Cite this article:
Smoke Facts for Kids. Kiddle Encyclopedia.