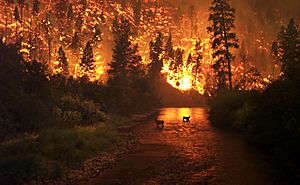 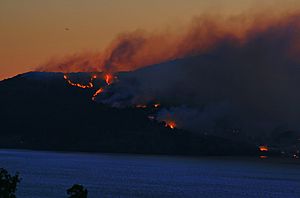 A wildfire on Angel Island

Wildfire is a general term which includes forest fires, grassland fires, bushfires, brush fires and any other vegetation fire in countryside areas.

Wildfires occur in every continent except Antarctica. They can occur naturally and spontaneously, but many are caused by humans, accidentally or deliberately. Fossil records and human history show that wildfires do occur at intervals. The Great Oxygenation Event and the spread of land plants made Earth a planet of fire.

Wildfires can cause extensive damage to property and human life, but they also have some beneficial effects on wilderness areas. Some plant species depend on the effects of fire for growth and reproduction, although large wildfires may also have negative ecological effects.

Strategies of wildfire prevention, detection, and suppression have varied over the years. One of the more controversial methods is controlled burn: People permit or light small fires to burn away some of the fuel for a potential wildfire. While some wildfires burn in remote forested regions, they can cause extensive destruction of homes and other property in the zone between developed areas and undeveloped wilderness.

Ecological succession after a wildfire in a boreal pine forest next to Hara Bog, Lahemaa National Park, Estonia. The pictures were taken one and two years after the fire.

Plants in wildfire-prone ecosystems often have adaptations to their local conditions. Such adaptations include physical protection against heat, increased growth after a fire event, and flammable materials that encourage fire and eliminate competition. For example, plants of the genus Eucalyptus contain flammable oils that encourage fire and hard sclerophyll leaves that resist heat and drought. This makes them dominant over less fire-tolerant species. Dense bark, shedding lower branches, and high water content in external structures may also protect trees from rising temperatures. Fire-resistant seeds and reserve shoots that sprout after a fire encourage species preservation, as in 'pioneer' species that specialize in restarting ecological succession after a fire.

Grasslands in Western Sabah, Malaysian pine forests, and Indonesian Casuarina forests are believed to have resulted from previous periods of fire. The deadwood litter of Chamise (Californian greasewood shrub) is low in water content and flammable, and the shrub quickly sprouts after a fire. Sequoia relies on periodic fires to reduce competition, release seeds from their cones, and clear the soil and canopy for new growth. Some have adapted to, and rely on, low-intensity surface fires for survival and growth. The optimum fire frequency for Caribbean pine in Bahamian pineyards is every 3 to 10 years. Too frequent fires favour herbaceous plants, and infrequent fires favour other tree species.

All content from Kiddle encyclopedia articles (including the article images and facts) can be freely used under Attribution-ShareAlike license, unless stated otherwise. Cite this article:
Wildfire Facts for Kids. Kiddle Encyclopedia.