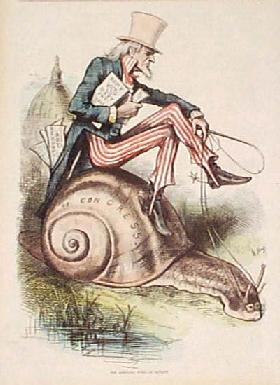 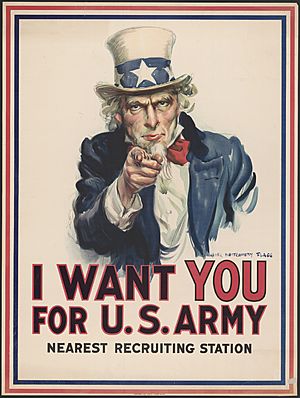 A famous Uncle Sam, drawn by James Montgomery Flagg during World War I.

Uncle Sam was first featured on a poster during World War I. It was used to get men and women to sign up for the army. Citizenship and duty went together with Uncle Sam. Uncle Sam is based on a real person named Samuel Wilson, who lived in Troy, New York. He owned a meat packing business with his brother. During the War of 1812, he supplied food for the American soldiers. The food barrels had a “U.S.” on them for United States. The troops knew Samuel was sending the food and called it “Uncle Sam’s.” In 1813 Uncle Sam became the nickname for the US Federal Government. People began to draw Uncle Sam in different ways. Thomas Nast was the first to popularize the image of Uncle Sam, from 1860-1870. Nast gave him a white beard and a Stars and Stripes suit. However, Uncle Sam was not yet done changing. By the early 1900s, Uncle Sam looked nothing like Samuel Wilson. In 1916, James Montgomery Flagg drew his own version of Uncle Sam. In his version Uncle Sam was wearing a tall top hat, blue jacket, and was pointing straight at the viewer. His version was put on the cover of Leslie’s Weekly with the caption “What Are You Doing For Preparedness?” In 1917 Flagg’s Uncle Sam reappeared as a poster with the caption “I Want You.” This poster was used all throughout World War I. The poster reappeared in World War II. Flagg’s illustration is now the standard for Uncle Sam. Uncle Sam has become one of the most iconic images in American politics.

All content from Kiddle encyclopedia articles (including the article images and facts) can be freely used under Attribution-ShareAlike license, unless stated otherwise. Cite this article:
Uncle Sam Facts for Kids. Kiddle Encyclopedia.