Mason is a town in Hillsborough County, New Hampshire, United States. The population was 1,382 at the 2010 census. Mason, together with Wilton, is home to Russell-Abbott State Forest.

Mason was first known as Number One, the first in a line of border towns including area allotted to the Province of New Hampshire after its border with neighboring Massachusetts was fixed in 1739. The town's charter was granted in 1749 by Colonial Governor Benning Wentworth, and in 1768 his nephew, Governor John Wentworth, named it in honor of New Hampshire's founder, Captain John Mason. Captain Mason was the holder of patent with title to the land that became New Hampshire. Greenville was set off from Mason in 1872.

Near the town's center is the boyhood home of Samuel Wilson, the meat-supplier who is believed to have inspired the Uncle Sam character. The private house is today identified by a state historical marker. Another prominent local figure was Elizabeth Orton Jones, an author, illustrator and teacher better known as "Twig." Jones is noted for her recording of town history and her dedication to Andy's Summer Playhouse, a renowned youth theater founded in Mason. Pickity Place, a local cottage built in 1759 by Ebenezer Blood, was the model for the grandmother's house in Jones' 1948 illustrated version of Little Red Riding Hood. Pickity Place was created by David and Judith Walter. It was also the home of Ron Harry, Boston Garden organist from 1983–1995 and for the Boston Celtics in the TD Banknorth Garden until his death in 2004. 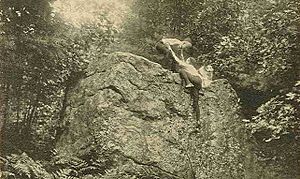 There were 433 households, out of which 31.9% had children under the age of 18 living with them, 65.8% were married couples living together, 5.5% had a female householder with no husband present, and 24.2% were non-families. 18.0% of all households were made up of individuals, and 6.2% had someone living alone who was 65 years of age or older. The average household size was 2.65 and the average family size was 3.02. 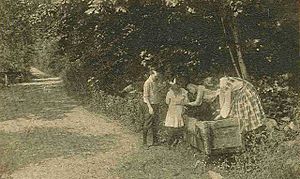 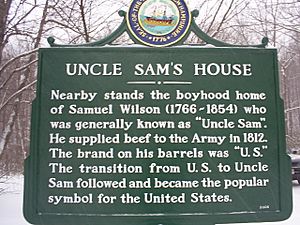 Mason is immediately north of the Massachusetts border, with the center of town approximately 5 kilometers from the state line. At the center of town are five public buildings: the library, elementary school, meetinghouse, church, and police station, all situated where Darling Hill, Old Ashby, Merriam Hill, Meetinghouse Hill and Valley roads meet. The public middle and high school students are tuitioned to Milford which is northeast of Mason. Also to the west is Greenville, location of the shared post office. On Depot Road, a kilometer down the hill from town center, is the Volunteer Fire and EMS Department and Town Highway Department.

All content from Kiddle encyclopedia articles (including the article images and facts) can be freely used under Attribution-ShareAlike license, unless stated otherwise. Cite this article:
Mason, New Hampshire Facts for Kids. Kiddle Encyclopedia.