The Merrimack River (or Merrimac River, an occasional earlier spelling) is a 117-mile-long (188 km) river in the northeastern United States. It rises at the confluence of the Pemigewasset and Winnipesaukee rivers in Franklin, New Hampshire, flows southward into Massachusetts, and then flows northeast until it empties into the Gulf of Maine at Newburyport. From Pawtucket Falls in Lowell, Massachusetts, onward, the Massachusetts–New Hampshire border is roughly calculated as the line three miles north of the river.

Several U.S. naval ships have been named USS Merrimack and USS Merrimac in honor of this river. The river is perhaps best known for the early American literary classic A Week on the Concord and Merrimack Rivers by Henry David Thoreau. 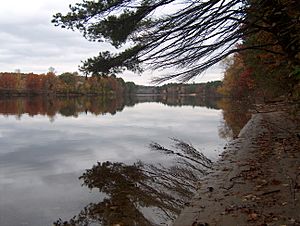 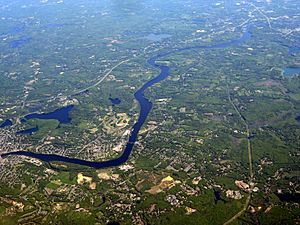 The Merrimack as it flows from Haverhill to its mouth in Newburyport, Massachusetts

There is some evidence that it is Native American. In 1604 the natives of later New England told Pierre Dugua, Sieur de Monts, who was leading a colony of French language speakers to Acadia (later Nova Scotia), of a beautiful river to the south. The French promptly pronounced its native name as Merremack. In 1605 Samuel de Champlain followed this lead, found the river and renamed it Riviere du Gas.

The French and their name did not remain on the Merrimack. The natives dwelling along the river at that time were the Agawam on the lower reaches, the Pawtucket at Lowell, Massachusetts, the Nashua, Souhegan and Namoskeag around Manchester, New Hampshire, the Pennacook northward from Bow, New Hampshire, and the Winnepisseogee at the source, Lake Winnipesaukee. These were all members of a nation of Algonquian speakers known as the Nipmuck, meaning "still water place".

According to Joseph B. Walker, relying on Chandler Eastman Potter's The History of Manchester (1856), Merremack contains the elements merruh ("strong") and auke ("place"—a recognizable locative ending), and means "the place of strong current,- a term not inappropriate, when we consider ... the river's rapids ...." Potter was an authority on Native American affairs in colonial New England. By contrast, in A Week on the Concord and Merrimack Rivers, Henry David Thoreau implies that "its name signifies the Sturgeon River."

Walker goes on to cite spellings of "Merimacke", "Merimack" and "Merrimacke" in "the colonial records of Massachusetts", as well as the "Merrimake" and "Merrymake" of a 1721 land grant at Penacook, New Hampshire. William Wood's New England's Prospect of 1634 calls the river the "Merrimacke" and locates it eight miles beyond Agowamme (Ipswich, Massachusetts). It hosts, he says, "Sturgeon, Sammon and Basse, and divers other kinds of fish."

Merrimac, Massachusetts, settled in 1638 and originally part of Amesbury, Massachusetts, was called West Amesbury until 1876, at which time it adopted its current name and spelling. Merrimack, New Hampshire, was incorporated in 1746, spelling its name "Marrymac" in the record of its first town meeting. It is referred to as "Merrimac" into the early 19th century: in the 1810 decennial census, it was spelled "Merrimac", but in the 1820 census and afterwards, "Merrimack".

In 1914, US Congressman John Jacob Rogers (MA) petitioned that the official spelling be "Merrimack".

Prior to glaciation, the Merrimack continued its southward course far beyond the present day New Hampshire-Massachusetts border to enter the Gulf of Maine near Boston. Upon the glacier's retreat, debris deposited north of Boston filled the lower Merrimack Valley, redirecting the river into its current northeast bend at Lowell. The Neville archaeological site is located along the river's banks in New Hampshire.

On the Merrimack River's banks are a number of cities built to take advantage of water power in the 19th century, when textile mills dominated the New England economy: Concord, Manchester, and Nashua in New Hampshire, and Lowell, Lawrence, and Haverhill in Massachusetts. At the mouth of the river is the small city of Newburyport. Prior to the construction of the Middlesex Canal, Newburyport was an important shipbuilding city, in a location to receive New Hampshire timber that had been floated downriver.

The river begins in the city of Franklin, New Hampshire, at the confluence of the Pemigewasset and Winnipesaukee rivers. From there, the river flows south through Concord, Manchester, and Nashua, entering Massachusetts at the town of Tyngsborough, where it turns northeast and winds past or through Chelmsford, Lowell, Dracut, Tewksbury, Andover, Methuen, Lawrence, North Andover, Haverhill, Groveland, West Newbury, Merrimac, and Amesbury, to its mouth at the Gulf of Maine between the city of Newburyport and the town of Salisbury.

In addition to the Merrimack River mainstem, there are dozens of sub-basins in New Hampshire and Massachusetts making up the watershed. The U.S. Geological Survey categorizes them into six fourth-level sub-basins using hydrological codes with the prefix 0107.

The following are some of the other significant rivers found within the six major sub-basins in the watershed, listed moving downstream along the Merrimack: 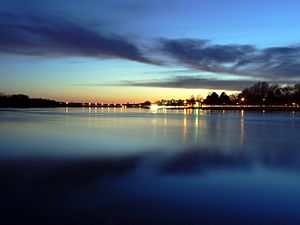 The Merrimack is listed as one of the Navigable Waters of the United States, subject to Section 10, Rivers and Harbors Act Jurisdiction. 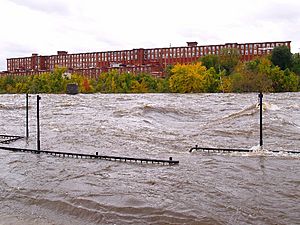 While the Merrimack River is prone to minor flooding, on May 15, 2006, rainfall raised the river more than 8 feet (2.4 m) above flood stage, forcing evacuations, damaging property, and breaking the main sewage pipeline in the city of Haverhill, Massachusetts, dumping 35 million gallons of raw sewage waste into the river per day. Reports of total rainfall vary, but most areas appear to have received around a foot of rain with some areas receiving as much as 17 inches (43 cm).

According to The Boston Globe, around 1,500 people evacuated their homes to escape the flood.

This flood also prompted the Massachusetts city of Lowell to install a modern (albeit temporary) flood control gate comprising square steel beams at the site of the historic Francis Gate, a 19th and 20th-century wooden flood gate. When lowered, the Francis gate seals the city's canal system off from its source on the Merrimack. The Great Gate, as it is also called, was built in 1850 under the direction of James B. Francis. Considered unnecessary when it was first constructed, "Francis' Folly" first saved the city in 1852 and subsequently in 1936.

The most significant flood in the recorded history of the Merrimack was in March 1936, when a double flood of rain and melting snow and ice swelled the Merrimack at Lowell to 68.4 feet (20.8 m), 10 feet (3 m) higher than the 2006 flood. Part of the Jack Kerouac book Doctor Sax is set during this event.

In addition to the 1936 flood, the 1852 flood, and the Mother's Day Flood of 2006, the New England Hurricane of 1938 and a flood in April 2007 round out the river's most serious flood events, measured at Lowell. The Francis Gate had been left in place after being dropped in 1936, so it prevented flooding in 1938 as well. In 2007, the steel beam system was again assembled in place.

The song "Merrimack River" and its instrumental reprise are featured on the 2009 album Amanda Leigh by Nashua, New Hampshire, native Mandy Moore.

All content from Kiddle encyclopedia articles (including the article images and facts) can be freely used under Attribution-ShareAlike license, unless stated otherwise. Cite this article:
Merrimack River Facts for Kids. Kiddle Encyclopedia.