Situated at the confluence of the Pemigewasset and Winnipesaukee rivers that form the Merrimack River, the town was settled by Anglo-European colonists in 1764 and originally known as Pemigewasset Village. It was taken from portions of Salisbury, Andover, Sanbornton and Northfield. The name Franklin was adopted in 1820 in honor of statesman and founding father Benjamin Franklin. Water power from the falls helped it develop as a mill town. It would incorporate as a town in 1828, and then as a city in 1895.

Daniel Webster was born in a section of Franklin that was then part of Salisbury. There is a state historic site located off Route 127 that preserves the famous orator's childhood home. As an adult, Webster owned "The Elms", a farm near the Merrimack River along present-day Route 3.

According to the United States Census Bureau, the city has a total area of 29.1 square miles (75.4 km2), of which 27.3 square miles (70.7 km2) is land and 1.9 square miles (4.9 km2) is water, comprising 6.31% of the town. It is drained by the Winnipesaukee, Pemigewasset and Merrimack rivers. Webster Lake is in the north. The highest point in Franklin is an unnamed summit near the northwestern corner of the city limits, where the elevation reaches approximately 1,370 feet (420 m) above sea level. Franklin lies fully within the Merrimack River watershed. 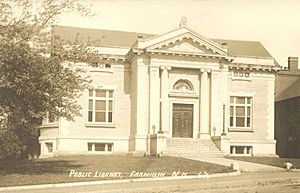 All content from Kiddle encyclopedia articles (including the article images and facts) can be freely used under Attribution-ShareAlike license, unless stated otherwise. Cite this article:
Franklin, New Hampshire Facts for Kids. Kiddle Encyclopedia.