Tilton is a town on the Winnipesaukee River in Belknap County, New Hampshire, United States. The population was 3,962 at the 2020 census, up from 3,567 at the 2010 census. It includes the villages of Tilton and Lochmere and part of the village of Winnisquam. Tilton is home to the Tilton School, a private preparatory school.

Originally the southern part of Sanbornton, the present area of Tilton was known as Sanbornton Bridge and Bridge Village. These two names refer to the bridge, built in 1763, that crossed the Winnipesaukee River from Canterbury to Sanbornton and onto what is now Main Street in Tilton. In 1869, Sanbornton Bridge was set off and incorporated as Tilton, named in honor of Nathaniel Tilton, whose grandson Charles E. Tilton was the owner of textile mills and the community's wealthiest citizen. Nathaniel Tilton established an iron foundry and the area's first hotel, the Dexter House. Charles E. Tilton donated many statues to the town, a unique feature, and his estate is now part of the Tilton School. Tilton Hall, his former mansion built in 1861, houses the Lucian Hunt Library. The attached carriage house was renovated in 1980 to become the Helene Grant Daly Art Center.

Charles E. Tilton also donated what is perhaps the most notable landmark in the area, the hilltop Memorial Arch, located in the neighboring town of Northfield, across the Winnipesaukee River from the center of Tilton. The Roman arch replica was built in the late 1800s as a memorial to his ancestors. It is built of Concord granite, 50 feet (15 m) high and 40 feet (12 m) wide.

The highest point in Tilton is 866 feet (264 m) above sea level, along the town's northern border, near the summit of Calef Hill.

Tilton is served by Interstate 93, U.S. Route 3, and state routes 11, 132 and 140. Tilton is considered the gateway to the Lakes Region of the state, and a large commercial and retail district has sprung up at the intersection of the five aforementioned routes, just off Exit 20 of I-93. The historic village of Tilton is located a short distance to the west of the new commercial development, on the northern banks of the Winnipesaukee. 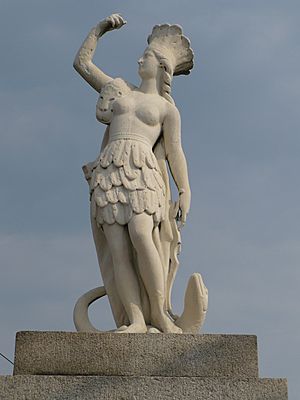 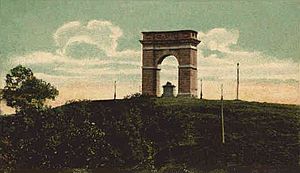 All content from Kiddle encyclopedia articles (including the article images and facts) can be freely used under Attribution-ShareAlike license, unless stated otherwise. Cite this article:
Tilton, New Hampshire Facts for Kids. Kiddle Encyclopedia.