Northfield is a town in Merrimack County, New Hampshire, United States. The population was 4,829 at the 2010 census.

Settlers first arrived in Northfield in the early 1700s. Initially Northfield was incorporated as part of Canterbury when that town was established in 1741. At the time it was a frontier town protected by a garrison fort erected on a hill close to Canterbury Center and commanded by Capt. Jeremiah Clough. Tradition has it that the first settlers of the "north fields" of Canterbury came from the scouts from this fort who patrolled the area in the 1740s.

By 1780 the residents of the north fields found it increasingly difficult to travel to the center of Canterbury to attend to town business. On March 30, 1780, they filed the following petition with the State of New Hampshire (spelling left as printed in 1780):

Canterbury, March 30, 1780
“The humble petition of ye Subscribers Inhabitants of ye North part of sd Canterbury to ye Honorable ye President and members of Council and house of Representatives of said State. We your Humble Petitioners Living at a great Distance from ye Center of the Towne Some of us nine or ten Miles and Consequently at a very great disadvantage in joining with them all Publick Town affairs, being encouraged Partly by our Living in that Part of ye Town that was Laid out for what was called ye upper Parish and Partly by ye Kind Reception our Request met with which we made to ye Town for a dismission but more particularly by our Confidence in your Honors desire to Promote ye Happiness of every Part of ye State Humbly Pray that Honors would take our Case into your Serious Consideration and grant that we together with all those Live in sd Upper Part may be Erected and Incorporated into a body Politick and Corporate to have Continuance in ye Name of Northfield with all such Powers and Authorities Privileges Immunities and Franchises with other Parishes or Towns in this State in General hold Enjoy with your Petitions as in duty bound Shall forever pray.”

The petition, signed by 43 residents, was approved by the state legislature, and the Town of Northfield was born.

In 1848, the Boston, Concord and Montreal Railroad opened to Northfield, helping it develop symbiotically with Tilton across the river as a mill town. The Winnipesaukee River provided water power for mills, and by 1859, when the population was 1,332, Northfield had a woolen factory and a wrapping paper mill.

Northfield continued to combine a strong industrial base with a healthy agricultural community throughout the 19th and most of the 20th centuries. Early sawmills and gristmills gave way to large textile and paper mills. As these industries died out in the area many old mill buildings were torn down. Others were used for the manufacture of other items, including optical lenses and lead batteries. 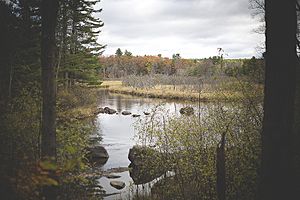 View from the Winnipesaukee River Trail

According to the United States Census Bureau, the town has a total area of 29.0 square miles (75.1 km2), of which 28.8 sq mi (74.6 km2) is land and 0.3 sq mi (0.8 km2) is water, comprising 0.89% of the town. It is drained by the Merrimack River, primarily by way of the Winnipesaukee River and its tributary Williams Brook. The town is characterized by gently rolling hills, the highest point in town being the summit of Bean Hill at 1,500 feet (460 m) above sea level, near the southern border. Two significant water bodies in Northfield are Sandogardy Pond in the southwest corner of town and Knowles Pond on the east side of town.

Northfield is located in central New Hampshire and is served by several state and federal transportation routes. Interstate 93 runs through Northfield and serves the town with one partial exit and one nearby exit. Exit 19, closest to the center of town, allows for entry onto the southbound lanes of I-93 and exit from the northbound lanes. A full I-93 interchange, exit 20, is located less than a mile from Northfield, in the neighboring town of Tilton. 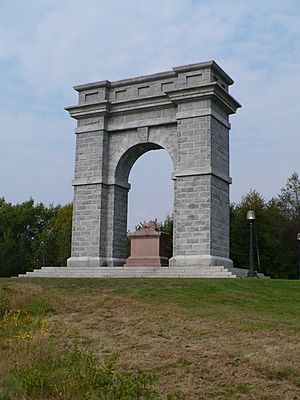 Tilton Memorial Arch (1882) in Arch Hill Park in Northfield, offering a commanding view of the area

Today Northfield is the home of more than 70 large and small businesses. Its proximity to the robust commercial development in nearby Tilton has precluded the development of a strong commercial base in Northfield, but development in other sectors have provided Northfield with a strong and diverse economy. Manufacturers including Eptam Plastics, Blouin Steel Fabricators, Freudenberg NOK, and PCC Structurals form the backbone of the town's manufacturing/industrial base. The service sector employs more than 400 people and constitutes 40% of the overall workforce.

Although many of the town's residents travel to nearby commercial and business centers in Tilton, Concord or Manchester for employment, nearly a thousand people work in Northfield, according to the NH Economic and Labor Market Information Bureau.

Highland Mountain Bike Park is in the southern part of the town.

Northfield is a member of the Winnisquam Regional School District. Elementary education is provided at Union Sanborn School and Southwick School, both located in Northfield. Winnisquam Regional Middle School and Winnisquam Regional High School are located in the adjacent town of Tilton. Along with Tilton, Northfield is home to the facilities of the Tilton School, an independent college-preparatory school serving grades 9 - 12. Northfield is also home to Spaulding Youth Center, a provider of educational, residential, therapeutic and foster care programs and services for children and youth with neurological, emotional, behavioral, learning or developmental challenges, including Autism Spectrum Disorder and those who have experienced significant trauma, abuse or neglect.

All content from Kiddle encyclopedia articles (including the article images and facts) can be freely used under Attribution-ShareAlike license, unless stated otherwise. Cite this article:
Northfield, New Hampshire Facts for Kids. Kiddle Encyclopedia.