Belmont is a town in Belknap County, New Hampshire, United States. The population was 7,314 at the 2020 census.

The primary settlement in town, where 1,285 people resided at the 2020 census, is defined by the U.S. Census Bureau as the Belmont census-designated place (CDP) and includes the densely populated portion of the town near the intersection of New Hampshire routes 106 and 140. 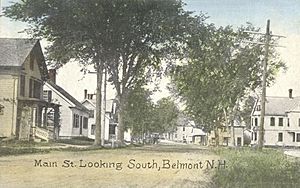 Originally known as "Upper Gilmanton", Belmont was chartered in 1727 as a parish of Gilmanton. With water power from the Tioga River, it developed as a mill town. Built in 1833, the Gilmanton Village Manufacturing Co. made cotton and woolen textiles. Over the years it would change owners, names and products. In 1921, it was the Belmont Hosiery Co., a maker of silk, lisle and woolen stockings. It went out of business in 1955, and the renovated mill building is now a community center.

Separated from Gilmanton by an act of legislature, the town was incorporated on 28 June 1859 as Upper Gilmanton. The name Belmont was adopted in 1869 to honor August Belmont, a wealthy financier who (it was hoped) would contribute to the nascent town, but he never acknowledged the act.

In 1874, the Boston, Concord and Montreal Railroad passed through the northwestern section of Belmont, and service by the Franklin and Rochester Railroad was being planned.

The 1996-1998 adaptive reuse Belmont Mill project, federally funded through Community Development Block Grants, a major private donation and taxpayer support, has been distinguished by regional, statewide and national awards for architectural and preservation excellence. The Belmont Mill story is featured on a NH Historical Highway Marker on nearby State Route 140, and was cited in 2012 by the New Hampshire Preservation Alliance as one of the 25 milestone efforts of a quarter century. The mill was added to the New Hampshire Register of Historic Places in 2014, joining the 1792 Province Road Meeting House on State Route 107, listed since 2003. Other significant historic structures in the town include the Belmont Public Library, included on the National Register of Historic Places in 1985, and the Bandstand, cited for outstanding restoration and rehabilitation in 2015 with the Elizabeth Durfee Hengen Award from the New Hampshire Preservation Alliance.

According to the United States Census Bureau, the town has a total area of 32.3 square miles (83.7 km2), of which 30.5 square miles (78.9 km2) is land and 1.9 square miles (4.8 km2) is water, comprising 5.76% of the town. The highest point in Belmont is Cotton Hill, summit near the town's northern border. Drained by the Tioga River, Belmont lies fully within the Merrimack River watershed.

All content from Kiddle encyclopedia articles (including the article images and facts) can be freely used under Attribution-ShareAlike license, unless stated otherwise. Cite this article:
Belmont, New Hampshire Facts for Kids. Kiddle Encyclopedia.