Laconia is a city in Belknap County, New Hampshire, United States. The population was 15,951 at the 2010 census. It is the county seat of Belknap County. Laconia, situated between Lake Winnipesaukee and Winnisquam Lake, includes the villages of Lakeport and Weirs Beach. Each June for nine days beginning on the Saturday of the weekend before Father's Day and ending on Father's Day, the city hosts Laconia Motorcycle Week, also more simply known as 'bike week', one of the country's largest rallies, and each winter, the Laconia World Championship Sled Dog Derby. The city is also the site of the state's annual Pumpkin Festival since 2015, having organized it after its former home of Keene rejected it due to riots in their neighborhoods in 2014. The city also includes one of the colleges of the Community College System of New Hampshire. 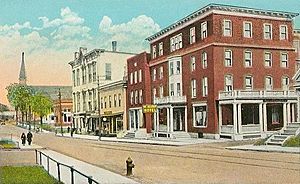 A large Abenaki Indian settlement called Acquadocton Village once existed at the point now known as The Weirs, named by colonists for fishing weirs discovered at the outlet of the Winnipesaukee River. Early explorers had hoped to follow the Piscataqua River north to Lake Champlain in search of the great lakes and rivers of Canada mentioned in Indian folklore. About 1652, the Endicott surveying party visited the area, an event commemorated by Endicott Rock, a local landmark. A fort would be built at Laconia in 1746. But ongoing hostilities between the English, French, and their respective Native American allies prevented settlement until 1761, after which it remained for many years a part of Meredith and Gilford called Meredith Bridge.

Beginning in 1765, lumber and grist mills were established on Mill Street, with taverns built soon thereafter on Parade Street. About 1822, the courthouse was built, which would become county seat at the creation of Belknap County in 1840. In 1823, the Belknap Mill was built to manufacture textiles; in operation by 1828, the structure is today a museum listed on the National Register of Historic Places and is the oldest unaltered brick textile mill in the country. Local industry produced lumber, textiles, shoes, hosiery, knitting machinery and needles. But the city's largest employer would be the Laconia Car Company, builder of rail, trolley and subway cars. Started in 1848, it lasted until the 1930s. The railroad entered town in 1849, carrying both freight and an increasing number of summer tourists to popular Weirs Beach.

In 1855, Laconia was incorporated as a town from land in Meredith Bridge, Lakeport, Weirs and part of Gilmanton. The name was probably derived from the old Laconia Company, formed by Captain John Mason and the Masonian Proprietors to sell parcels of land during the colonial era. The Great Fire of 1860 destroyed most of Main Street from Mill to Water streets, followed by the Great Lakeport Fire of 1903, a blaze so fierce that fire companies were brought by train from as far away as Dover. Laconia was incorporated as a city in 1893.

Laconia is located northwest of the geographic center of Belknap County. The city lies at the center of New Hampshire's Lakes Region, and all or part of four major bodies of water lie within its limits: Lake Winnipesaukee, Winnisquam Lake, Opechee Bay and Paugus Bay (sometimes counted as an arm of Winnipesaukee, but historically a separate body of water).

Laconia's downtown is located along the Winnipesaukee River between Opechee Bay to the north and Winnisquam Lake to the southwest. Other villages within the city limits include Lakeport, at the north end of Opechee Bay, and Weirs Beach, around the channel connecting Paugus Bay with Lake Winnipesaukee.

Laconia Municipal Airport is located just east of the city limits in Gilford.

According to the United States Census Bureau, the city has a total area of 26.6 square miles (68.8 km2), of which 20.0 square miles (51.9 km2) is land and 6.5 square miles (16.9 km2) is water, comprising 24.54% of the city. Laconia is drained by the Winnipesaukee River. It is bounded in the southwest by Winnisquam Lake, and by Lake Winnipesaukee in the northeast. Laconia lies fully within the Merrimack River watershed. The highest point in Laconia is a 960-foot (290 m) hill in the northern part of the city, west of Paugus Bay's Pickerel Cove and just east of Route 106.

There were 6,724 households out of which 28.0% had children under the age of 18 living with them, 46.4% were married couples living together, 11.2% had a female householder with no husband present, and 38.0% were non-families. 30.3% of all households were made up of individuals and 12.3% had someone living alone who was 65 years of age or older. The average household size was 2.32 and the average family size was 2.87. 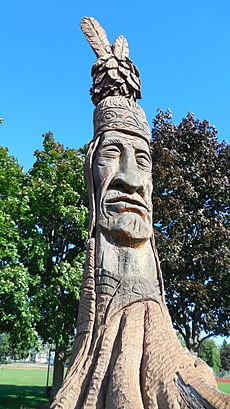 Memorial of Keewakwa Abenaki Keenahbeh in Opechee Park, which stands at a height of 36 ft. During the dedication ceremonies in September 1984 more than 3,000 attended, which included an estimated 100 members of the Pennacook tribe.

Laconia is home to the Laconia Muskrats of the New England Collegiate Baseball League (NECBL). The franchise began play in 2010 at Robbie Mills Field in Laconia. Starting in the 2014-15 season, the city will be home to the New Hampshire Fighting Spirit of the Northern States Junior Hockey League (NSHL).

One of the largest motorcycle rallies in the world takes place in Laconia during nine days in June, ending on Father's Day. Founded in 1923, attendance was 375,000 in 2004 and 188,000 in 2010. Events include races, shows, and a motorcycle hill climb competition.

After the city council of Keene, New Hampshire, rejected the permit for their annual Pumpkin Festival to be held there following riots in the city's neighborhoods in 2014, it was announced that Laconia would host the festival for the city's first time in 2015. The twenty-fifth New Hampshire Pumpkin Fest was held on October 24, 2015 with less than ten thousand jack-o'-lanterns lit. The festival will be held in Laconia again in 2017, establishing the city as the new official venue for the annual event.

All content from Kiddle encyclopedia articles (including the article images and facts) can be freely used under Attribution-ShareAlike license, unless stated otherwise. Cite this article:
Laconia, New Hampshire Facts for Kids. Kiddle Encyclopedia.