Meredith is a town in Belknap County, New Hampshire, United States. The population was 6,662 at the 2020 census. Meredith is situated in the state's Lakes Region and serves as a major resort town. Meredith Village, the commercial center of the town, lies long the shores of Lake Winnipesaukee, and several other large lakes lie partially or completely within the town borders. It is home to the Stonedam Island Natural Area and the Winnipesaukee Scenic Railroad, and it serves as one of the ports of call for the paddle steamer MS Mount Washington.

Meredith Village, where 2,527 people resided at the 2020 census, is defined as the Meredith census-designated place, and is located at the junction of U.S. Route 3 and New Hampshire Route 25 at the head of Meredith Bay on Lake Winnipesaukee. 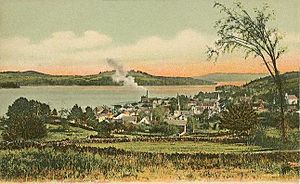 Meredith was first known as Palmer's Town in honor of Samuel Palmer, a teacher of surveying and navigation who laid out much of the land surrounding Lake Winnipesaukee. In 1748, it was one of the first towns to have a charter granted by the Masonian Proprietors. Many grantees were from Salem, Massachusetts, so Palmer's Town was renamed New Salem. It was settled in 1766 by Jacob Eaton and Colonel Ebenezer Smith, then regranted in 1768 by Governor John Wentworth and named after Sir William Meredith, 3rd Baronet, a member of Parliament who opposed taxation on the colonies.

Farmers grew corn, wheat, rye and potatoes, but the area became noted for apple orchards. The outlet of Lake Waukewan provided water power sites, and by 1859 Meredith village had a sawmill, gristmill, shingle mill, blacksmith shop, harness-maker's shop and tannery. Situated at the outlet of Wickwas Lake, Meredith Center had a sawmill, gristmill and blacksmith shop. Connected by the Boston, Concord & Montreal Railroad in March 1849, the town became a summer resort. Passengers also arrived from the Alton Bay depot aboard steamboats, the most famous of which was the original SS Mount Washington, launched in 1872. Meredith remains a popular tourist destination. 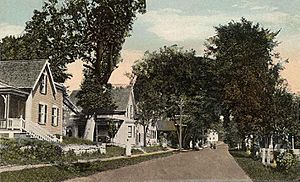 Meredith village, formally defined by the U.S. Census Bureau as the Meredith census-designated place (CDP), has a total area of 1.9 sq mi (4.8 km2). 1.5 sq mi (3.8 km2) of it is land and 0.39 sq mi (1.0 km2) of it (20.08%) is water. Meredith village is the commercial hub of the town, and lies between the northern tip of Meredith Bay, one of several large arms of Lake Winnipesaukee and Lake Waukewan. A second village, Meredith Center, is located near the shores of Lake Wickwas closer the geographic center of the town. Meredith Center has much less commercial development than Meredith Village, being located near several protected state forests and wildlife areas.

Like many other towns of the Lakes Region, Meredith is dominated by several large bodies of water. About half of the town's southeastern boundary with its neighbor Laconia is occupied by Winnisquam Lake, while the northern half of town lies within a peninsula, Meredith Neck, that separates Meredith Bay from the main body of Lake Winnipesaukee, giving Meredith an extensive coastline. Bear Island, the second largest on Winnipesaukee, and Stonedam Island, along with dozens of smaller islands are also part of the town. Several smaller lakes lie between Winnipesaukee and Winnisquam, including Wickwas Lake and Pemigewasset Lake. Lake Waukewan forms the western edge of the Meredith Village CDP and extends into neighboring New Hampton. 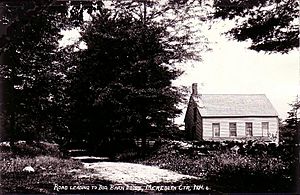 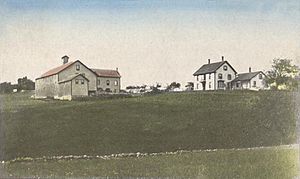 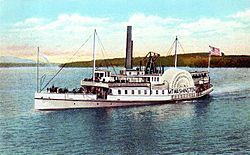 All content from Kiddle encyclopedia articles (including the article images and facts) can be freely used under Attribution-ShareAlike license, unless stated otherwise. Cite this article:
Meredith, New Hampshire Facts for Kids. Kiddle Encyclopedia.