Center Harbor is a town in Belknap County, New Hampshire, United States. As of the 2020 census, the town had a population of 1,040. It is situated between Lake Winnipesaukee and Squam Lake.

Center Harbor separated from the town of New Hampton, and was first incorporated in 1797. The town gets its name from two sources: from its location, centered between Meredith and Moultonborough harbors, and also from the Senter family, who were owners of a large amount of property in the area. The town was a landing place for lake steamers and stagecoaches, making it a popular summer resort. Center Harbor was a favorite spot of John Greenleaf Whittier, and the home of Dudley Leavitt, author of the first Farmers' Almanac in 1797. Center Harbor is the winter home of the paddle steamer MS Mount Washington, the largest boat on Lake Winnipesaukee.

Center Harbor witnessed the first intercollegiate sporting event in the United States, as Harvard defeated Yale by two lengths in the first Harvard-Yale Regatta on August 3, 1852 on Lake Winnipesaukee.

According to the United States Census Bureau, the town has a total area of 16.5 square miles (42.8 km2). 13.4 sq mi (34.6 km2) of it is land, and 3.2 sq mi (8.2 km2) of it is water, comprising 19.21% of the town. It has several miles of shoreline on Squam Lake and another mile on Lake Winnipesaukee, where its main "harbor" lies. The town center sits eccentrically near Center Harbor's northeast border, where it rises gently from the shore at the junction of New Hampshire Routes 25 and 25B. The highest point in town, Sunset Hill, elevation 1,121 feet (342 m) above sea level, overlooks the town center from the west. Center Harbor lies fully within the Merrimack River watershed.

NH 25 passes through the eastern edge of town, including the town center, connecting Meredith to the south with Moultonborough to the northeast. U.S. Route 3 and NH 25 pass north-south through the western part of town, connecting Meredith to the south with Holderness to the northwest. NH 25B leads from the town center west to US 3 and NH 25, forming a short-cut for through-travelers on NH 25.

The Proctor Wildlife Sanctuary, owned by the Audubon Society of New Hampshire, occupies 47 acres (19 ha) of woodlands northwest of the town center. Adjacent to this property is Center Harbor Woods, a 225 acres (91 ha) conservation area owned by the Lakes Region Conservation Trust and protected by a conservation easement held by the Squam Lakes Conservation Society and the town of Center Harbor. The two properties abut a third conservation property in neighboring Moultonborough, resulting in a block of protected woodland comprising nearly 400 acres (160 ha). 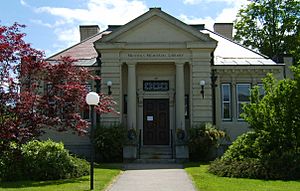 Center Harbor hosts a Fourth of July celebration featuring a road race (including a children's race around the library), parade, band concert, and fireworks over the lake. The Center Harbor Town Band, founded in 1878, offers free concerts on Fridays in the summer. In the winter, the town is a stop for snowmobile enthusiasts. 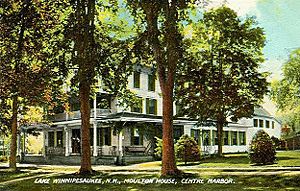 Aside from small dairy and truck farms, the community's main industry is tourism. Restaurants and motels dot the shoreline, with a beach and playground at the town's center which is shared by residents of Moultonborough. The economy is booming, with the historic E.M Heath Grocery Store tripled in size, and now joined in town by Bayswater Book Co., Sam and Rosies Cafe and Bakery, Wild Meadow Canoe and Kayak Outfitter, Yikes Art Gallery, Keepsakes Quilters, and The Edge Handcrafted Boutique. Upscale restaurants have opened, including Canoe and Lavinia's Relaxed Dining, established in a landmark building. 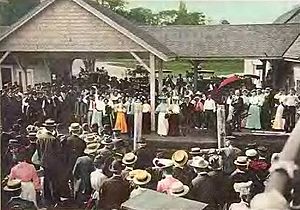 Center Harbor's one-room schoolhouse closed in the 1970s, and students now attend Inter-Lakes Elementary and Inter-Lakes Junior-Senior High in Meredith, joining students from that town and from Sandwich. During the period 1963–1973, a college existed in Center Harbor. Named Belknap College, it occupied several locations in town, using old hotels for dorms, though the academic campus was located several miles away. Anchored by a mansion now used for the New Hampshire Music Festival, and several other buildings, the campus was a center of activity.

The town was the home of Immaculate Conception Apostolic School, an all-male Roman Catholic boarding school, educating between 80–100 students from grades 7 to 12. It is sponsored by the Legionaries of Christ, a religious congregation of the Roman Catholic Church. It was listed for sale in 2021.

All content from Kiddle encyclopedia articles (including the article images and facts) can be freely used under Attribution-ShareAlike license, unless stated otherwise. Cite this article:
Center Harbor, New Hampshire Facts for Kids. Kiddle Encyclopedia.