Squam Lake is a lake located in the Lakes Region of central New Hampshire, United States, south of the White Mountains, straddling the borders of Grafton, Carroll, and Belknap counties. The largest town center on the lake is Holderness. The lake is located northwest of much larger Lake Winnipesaukee.

It drains via a short natural channel into Little Squam Lake, and then through a dam at the head of the short Squam River into the Pemigewasset at Ashland. Covering 6,791 acres (27.48 km2), Squam is the second-largest lake located entirely in New Hampshire. 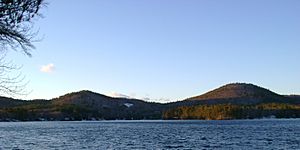 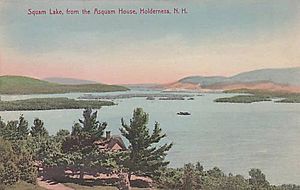 Squam Lake was originally called Keeseenunknipee, which meant "the goose lake in the highlands". The white settlers that followed shortened the name to "Casumpa", "Kusumpy" and/or "Kesumpe" around 1779. In the early 19th century, the lake was given another Abenaki name, Asquam, which means "water". Finally, in the early 20th century, Asquam was shortened to its present version, Squam.

The 1981 film On Golden Pond was filmed in the town of Center Harbor on Squam Lake. There are two tour boat services on the lake, both based in Holderness. One is Experience Squam, a private charter, and the other is the Squam Lakes Natural Science Center. Both services show filming locations and items of natural significance.

Squam Lake is a nesting site for common loons and is a good place to see them in breeding plumage during the summer months. Bald eagles and great blue herons are also known to nest on the lake.

All content from Kiddle encyclopedia articles (including the article images and facts) can be freely used under Attribution-ShareAlike license, unless stated otherwise. Cite this article:
Squam Lake Facts for Kids. Kiddle Encyclopedia.