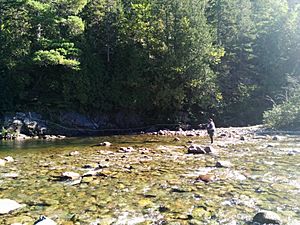 An Atlantic Salmon Recreational Fishermen in the Pabos River of Quebec. 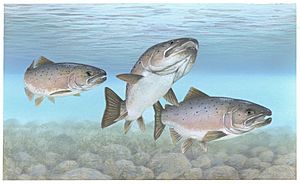 Atlantic salmon are among the largest salmon species

The colouration of young Atlantic salmon does not resemble the adult stage. While they live in fresh water, they have blue and red spots. At maturity, they take on a silver-blue sheen. The easiest way of identifying them as an adult is by the black spots predominantly above the lateral line, though the caudal fin is usually unspotted. When they reproduce, males take on a slight green or red colouration. The salmon has a fusiform body, and well-developed teeth. All fins, save the adipose, are bordered with black.

Ocean migration of Atlantic salmon from the Connecticut River

The distribution of Atlantic salmon depends on water temperature. Because of climate change, some of the species' southern populations, in Spain and other warm countries, are growing smaller and are expected to be extirpated soon. Before human influence, the natural breeding grounds of Atlantic salmon were rivers in Europe and the eastern coast of North America. When North America was settled by Europeans, eggs were brought on trains to the west coast and introduced into the rivers there. Other attempts to bring Atlantic salmon to new settlements were made; e.g. New Zealand. But since there are no suitable ocean currents on New Zealand, most of these introductions failed. There is at least one landlocked population of Atlantic salmon on New Zealand, where the fish never go out to sea.

Young salmon spend one to four years in their natal river. When they are large enough (c. 15 centimetres (5.9 in)), they smoltify, changing camouflage from stream-adapted with large, gray spots to sea-adapted with shiny sides. They also undergo some endocrinological changes to adapt to osmotic differences between fresh water and seawater habitat. When smoltification is complete, the parr (young fish) now begin to swim with the current instead of against it. With this behavioral change, the fish are now referred to as smolt. When the smolt reach the sea, they follow sea surface currents and feed on plankton or fry from other fish species such as herring. During their time at sea, they can sense the change in the Earth magnetic field through iron in their lateral line.

Wild salmon disappeared from many rivers during the twentieth century due to overfishing and habitat change. By 2000, the numbers of Atlantic salmon had dropped to critically low levels.

Young salmon begin a feeding response within a few days. After the yolk sac is absorbed by the body, they begin to hunt. Juveniles start with tiny invertebrates, but as they mature, they may occasionally eat small fish. During this time, they hunt both in the substrate and in the current. Some have been known to eat salmon eggs. The most commonly eaten foods include caddisflies, blackflies, mayflies, and stoneflies.

Fry and parr have been said to be territorial, but evidence showing them to guard territories is inconclusive. While they may occasionally be aggressive towards each other, the social hierarchy is still unclear. Many have been found to school, especially when leaving the estuary.

Adult Atlantic salmon are considered much more aggressive than other salmon, and are more likely to attack other fish than others. A matter of concern is where they have become an invasive threat, attacking native salmon, such as Chinook salmon and coho salmon.

Life cycle of the Atlantic salmon

Most Atlantic salmon follow an anadromous fish migration pattern, in that they undergo their greatest feeding and growth in saltwater; however, adults return to spawn in native freshwater streams where the eggs hatch and juveniles grow through several distinct stages.

Atlantic salmon do not require saltwater. Numerous examples of fully freshwater (i.e., "landlocked") populations of the species exist throughout the Northern Hemisphere, including a now extinct population in Lake Ontario, which have been shown in recent studies to have spent their entire life cycle in watershed of the lake. In North America, the landlocked strains are frequently known as ouananiche.

The freshwater phases of Atlantic salmon vary between two and eight years, according to river location. While the young in southern rivers, such as those to the English Channel, are only one year old when they leave, those further north, such as in Scottish rivers, can be over four years old, and in Ungava Bay, northern Quebec, smolts as old as eight years have been encountered. The average age correlates to temperature exceeding 7 °C (45 °F).

The first phase is the alevin stage, when the fish stay in the breeding ground and use the remaining nutrients in their yolk sacs. During this developmental stage, their young gills develop and they become active hunters. Next is the fry stage, where the fish grow and subsequently leave the breeding ground in search of food. During this time, they move to areas with higher prey concentration. The final freshwater stage is when they develop into parr, in which they prepare for the trek to the Atlantic Ocean.

During these times, the Atlantic salmon are very susceptible to predation. Nearly 40% are eaten by trout alone. Other predators include other fish and birds.. Egg and juvenile survival is highly dependent on habitat quality as Atlantic salmon are sensitive to ecological change.

When parr develop into smolt, they begin the trip to the ocean, which predominantly happens between March and June. Migration allows acclimation to the changing salinity. Once ready, young smolt leave, preferring an ebb tide.

Having left their natal streams, they experience a period of rapid growth during the one to four years they live in the ocean. Typically, Atlantic salmon migrate from their home streams to an area on the continental plate off West Greenland. During this time, they face predation from humans, seals, Greenland sharks, skate, cod, and halibut. Some dolphins have been noticed playing with dead salmon, but it is still unclear whether they consume them.

Once large enough, Atlantic salmon change into the grilse phase, when they become ready to return to the same freshwater tributary they departed from as smolts. After returning to their natal streams, the salmon will cease eating altogether prior to spawning. Although largely unknown, odor – the exact chemical signature of that stream – may play an important role in how salmon return to the area where they hatched. Once heavier than about 250 g, the fish no longer become prey for birds and many fish, although seals do prey upon them. Grey and common seals commonly eat Atlantic salmon. Survivability to this stage has been estimated at between 14 and 53%. 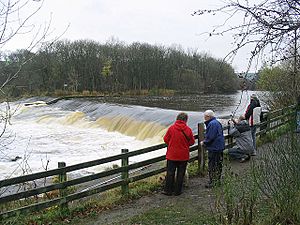 Atlantic salmon breed in the rivers of Western Europe from northern Portugal north to Norway, Iceland, and Greenland, and the east coast of North America from Connecticut in the United States north to northern Labrador and Arctic Canada.

Unlike the various Pacific salmon species which die after spawning (semelparous), the Atlantic salmon is iteroparous, which means the fish may recondition themselves and return to the sea to repeat the migration and spawning pattern several times, although most spawn only once or twice. Migration and spawning exact an enormous physiological toll on individuals, such that repeat spawners are the exception rather than the norm. Atlantic salmon show high diversity in age of maturity and may mature as parr, one- to five-sea-winter fish, and in rare instances, at older sea ages. This variety of ages can occur in the same population, constituting a ‘bet hedging’ strategy against variation in stream flows. So in a drought year, some fish of a given age will not return to spawn, allowing that generation other, wetter years in which to spawn.

All content from Kiddle encyclopedia articles (including the article images and facts) can be freely used under Attribution-ShareAlike license, unless stated otherwise. Cite this article:
Atlantic salmon Facts for Kids. Kiddle Encyclopedia.