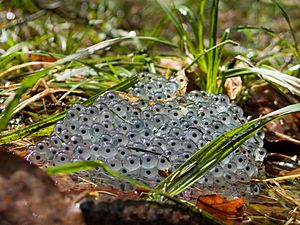 Spawn is the eggs of some animals. Laying those eggs is called spawning. Animals that live in water, such as fish and amphibians, reproduce by spawning. When the spawn hatches, the young fish are called fry and the young amphibians are called tadpoles.

All content from Kiddle encyclopedia articles (including the article images and facts) can be freely used under Attribution-ShareAlike license, unless stated otherwise. Cite this article:
Spawn (biology) Facts for Kids. Kiddle Encyclopedia.