The guppy (Poecilia reticulata), also known as millionfish and rainbow fish, is one of the world's most widely distributed tropical fish, and one of the most popular freshwater aquarium fish species. It is a member of the Poeciliidae family and, like almost all American members of the family, is live-bearing. Guppies, whose natural range is in northeast South America, were introduced to many habitats and are now found all over the world. They are highly adaptable and thrive in many different environmental and ecological conditions. Male guppies, which are smaller than females, have ornamental caudal and dorsal fins, while females are duller in colour. Wild guppies generally feed on a variety of food sources, including benthic algae and aquatic insect larvae. Guppies are used as a model organism in the field of ecology, evolution, and behavioural studies.

Guppies are native to Antigua and Barbuda, Barbados, Brazil, Guyana, Jamaica, the Netherlands Antilles, Trinidad and Tobago, the U.S. Virgin Islands, and Venezuela. However, guppies have been introduced to many different countries on every continent except Antarctica. They tend to be more abundant in smaller streams and pools than in large, deep, or fast-flowing rivers. 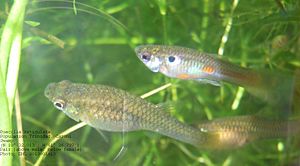 Sexual polymorphism exhibited in the Trinidadian guppy (above male, below female)

Guppies exhibit sexual dimorphism. While wild-type females are grey in body color, males have splashes, spots, or stripes that can be any of a wide variety of colors. The size of guppies vary, but males are typically 1.5–3.5 cm (0.6–1.4 in) long, while females are 3–6 cm (1.2–2.4 in) long.

A variety of guppy strains are produced by breeders through selective breeding, characterized by different colours, patterns, shapes, and sizes of fins, such as snakeskin and grass varieties. Many domestic strains have morphological traits that are very distinct from the wild-type antecedents. Males and females of many domestic strains usually have larger body size and are much more lavishly ornamented than their wild-type antecedents.

Guppies have 23 pairs of chromosomes, including one pair of sex chromosomes, the same number as humans. The genes responsible for male guppies' ornamentations are Y-chromosome linked and are heritable.

Two or three generations of guppies per year occur in the wild. Guppies are well developed and capable of independent existence without further parental care by the time they are born. Young guppies school together and perform antipredator tactics. Brood size is extremely variable, yet some consistent differences exist among populations depending on the predation level and other factors. Females of matching body sizes tend to produce more numerous but smaller-sized offspring in high predation conditions. Female guppies first produce offspring at 10–20 weeks of age, and they continue to reproduce until 20–34 months of age. Male guppies mature in 7 weeks or less. Total lifespan of guppies in the wild varies greatly, but it is typically around 2 years. Variations in such life historic characteristics of guppies are observed in different populations, indicating that different evolutionary pressures exist. 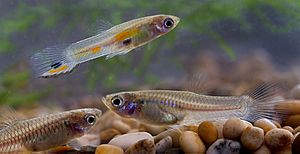 Guppies' body size is positively correlated with age, and their size at maturation varies highly depending on the predation risk of their habitats. Male and female guppies from high-predation regions mature faster and start reproducing earlier, and they devote more resources to reproduction than those from low-predation regions. Females from high-predation regions reproduce more frequently and produce more offspring per litter, indicating that they are more fecund than low-predation females. Female guppies' reproductive success is also related to age. Older females produce offspring with reduced size and at increased interbrood intervals. 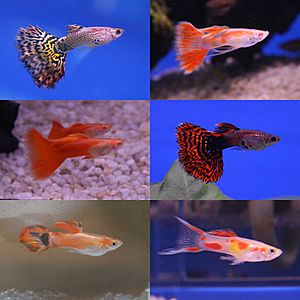 Wild guppies feed on algal remains, diatoms, invertebrates, plant fragments, mineral particles, aquatic insect larvae, and other sources. Algal remains constitute the biggest proportion of wild guppy diet in most cases, but diets vary depending on the specific conditions of food availability in the habitat. For example, a study on wild Trinidad guppies showed that guppies collected from an oligotrophic upstream region (upper Aripo River) mainly consumed invertebrates, while guppies from an eutrophic downstream region (lower Tacarigua River) consumed mostly diatoms and mineral particles. Algae are less nutritious than invertebrates, and the guppies that feed mainly on algae have poor diets.

Guppies' diet preference is not simply correlated to the abundance of a particular food. Laboratory experiments confirmed that guppies show 'diet switching' behavior, in which they feed disproportionately on the more abundant food when they are offered two food choices. The result shows that different groups of guppies have weak and variable food preference. Diet preference in guppies could be related to factors such as the presence of competitors. For example, the lower Tacarigua River has a larger variety of species and competition for invertebrate prey is higher, therefore the proportion of invertebrates is small in diets of those guppies.

Guppies often forage in groups because they can find food more easily. Shoaling guppies spend less time and energy on antipredatory behavior than solitary ones and spend more time on feeding. However, such behavior results in food that is found being shared with other members of the group. Studies also show when an evolutionary cost exists, guppies that tend to shoal are less aggressive and less competitive with regards to scarce resources. Therefore, shoaling is preferred in high-predation regions, but not in low-predation regions. When guppies with a high tendency to shoal were isolated from high-predation regions and were relocated to predator-free environments, over time, they decreased their shoaling behavior, supporting the hypothesis that shoaling is less preferred in low-predation environments. 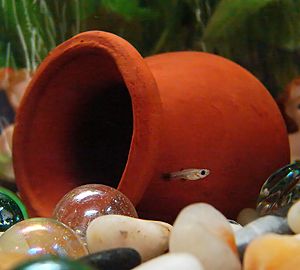 A guppy fry in an aquarium at one week of age

Guppies are highly prolific livebearers. The gestation period of a guppy is typically 21–30 days, varying considerably. 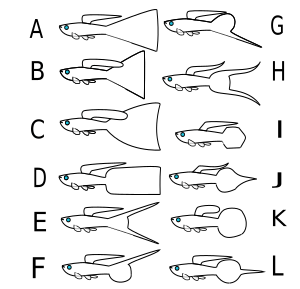 Guppies prefer a hard water aquarium with a temperature between 25.5 and 27.8 °C (78 and 82 °F) and salt levels equivalent to one tablespoon per 19 l (5 US gal). They can withstand levels of salinity up to 150% that of normal seawater, which has led to them being occasionally included in marine tropical community tanks, as well as in freshwater tropical tanks.

Guppies are generally peaceful, though nipping behaviour is sometimes exhibited between male guppies or towards other fish with prominent fins, such as angelfish. Guppys should not be kept as a single fish in an aquarium because both males and females show signs of shoaling, and are usually found in large groups in the wild. Its most famous characteristic is its propensity for breeding, and it can breed in both freshwater and marine aquaria.

All content from Kiddle encyclopedia articles (including the article images and facts) can be freely used under Attribution-ShareAlike license, unless stated otherwise. Cite this article:
Guppy Facts for Kids. Kiddle Encyclopedia.