The Poeciliidae are a family of freshwater fishes of the order Cyprinodontiformes, the tooth-carps, and include well-known live-bearing aquarium fish, such as the guppy, molly, platy, and swordtail. The original distribution of the family was the Southeastern United States to north of Río de la Plata, Argentina, and Africa, including Madagascar. Due to release of aquarium specimens and the widespread use of species of the genera Poecilia and Gambusia for mosquito control, though, poeciliids can today be found in all tropical and subtropical areas of the world. In addition, Poecilia and Gambusia specimens have been identified in hot springs pools as far north as Banff, Alberta.

Although the whole family Poeciliidae is known as "live bearers" (viviparous), some species are egg-scattering with external fertilization. All African species are egg-layers, and (with the exception of the members of the genus Tomeurus), all American species are live-bearers. Among the three subfamilies, the Aplocheilichthyinae are restricted to Africa, the Poeciliinae are primarily from the Americas (the only exception is the African Rhexipanchax), and the Procatopodinae are mainly from Africa (the South American Fluviphylax and Pseudopoecilia are the only exceptions). This distribution suggests that the Poeciliidae antedate the split between Africa and South America 100 million years ago, and that live-bearing subsequently evolved in South America. Poeciliids colonized North America through the Antilles, while they were connected 44 million years ago. Poeciliids then moved to Central America by the Aves land bridge on the Caribbean Plate. When South America connected to Central America three million years ago, some further dispersal southward occurred, but South American species did not move into Central America.

Among the live-bearing species, differences are seen in the mode and degree of support the female gives the developing larvae. Many members of the family Poeciliidae are considered to be lecithotrophic (the mother provisions the oocyte with all the resources it needs prior to fertilization, so the egg is independent of the mother), but others are matrotrophic (literally "mother feeding": the mother provides the majority of resources to the developing offspring after fertilization).

Members of the genus Poeciliopsis, for example, show variable reproductive life history adaptations. Poeciliopsis monacha, P. lucida, and P. prolifica form part of the same clade within that genus. However, their modes of maternal provisioning vary greatly. P. monacha can be considered to be lecithotrophic because it does not really provide any resources for its offspring after fertilization - the pregnant female is basically a swimming egg sac. P. lucida shows an intermediate level of matrotrophy, meaning that to a certain extent the offspring's metabolism can actually affect the mother's metabolism, allowing for increased nutrient exchange. P. prolifica is considered to be highly matrotrophic, and almost all of the nutrients and materials needed for fetal development are supplied to the oocyte after it has been fertilized. This level of matrotrophy allows Poeciliopsis to carry several broods at different stages of development, a phenomenon known as superfetation. Because the space for developing embryos is limited, viviparity reduces brood size. Superfetation can compensate for this loss by keeping embryos at various stages and sizes during development.

P. elongata, P. turneri, and P. presidionis form another clade that could be considered an outgroup to the P. monacha, P.lucida, and P. prolifica clade. These three species are very highly matrotrophic - so much so that in 1947, C. L. Turner described the follicular cells of P. turneri as "pseudo-placenta, pseudo-chorion, and pseudo-allantois". 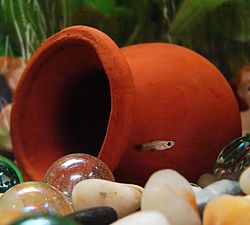 The family is divided into subfamilies and tribes as follows:

All content from Kiddle encyclopedia articles (including the article images and facts) can be freely used under Attribution-ShareAlike license, unless stated otherwise. Cite this article:
Poeciliidae Facts for Kids. Kiddle Encyclopedia.