Banff is a town within Banff National Park in Alberta, Canada. It is located in Alberta's Rockies along the Trans-Canada Highway, approximately 126 km (78 mi) west of Calgary and 58 km (36 mi) east of Lake Louise. At 1,400 to 1,630 m (4,590 to 5,350 ft) above sea level, Banff is the community with the second highest elevation in Alberta, after Lake Louise.

The Town of Banff was the first municipality to incorporate within a Canadian national park. The town is a member of the Calgary Regional Partnership.

Banff is a resort town and one of Canada's most popular tourist destinations. Known for its mountainous surroundings and hot springs, it is a destination for outdoor sports and features extensive hiking, biking, scrambling and skiing destinations within the area. Sunshine Village, Ski Norquay and Lake Louise Ski Resort are the three nearby ski resorts located within the national park. 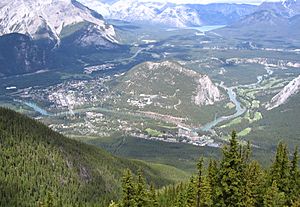 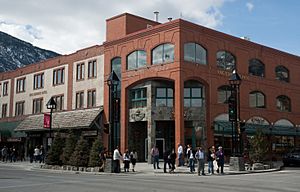 Banff was first settled in the 1880s, after the transcontinental railway was built through the Bow Valley. In 1883, three Canadian Pacific Railway workers stumbled upon a series of natural hot springs on the side of Sulphur Mountain. In 1885, Canada established a federal reserve of 26 km2 (10 sq mi) around the Cave and Basin hot springs, and began promoting the area as an international resort and spa as a way to support the new railway. In 1887, the reserve area was increased to 673 km2 (260 sq mi) and named "Rocky Mountain Park". This was the beginning of Canada's National Park system.

The area was named Banff in 1884 by George Stephen, president of the Canadian Pacific Railway, recalling his birthplace in Banff, Scotland. The Canadian Pacific built a series of grand hotels along the rail line and advertised the Banff Springs Hotel as an international tourist resort.

The Banff townsite was developed near the railway station as a service centre for tourists visiting the park. It was administered by the Government of Canada's national parks system until 1990 when the Town of Banff became the only incorporated municipality within a Canadian national park.

An Internment camp was set up at Banff and Castle Mountain in Dominion Park from July 1915 to July 1917.

In 1985, the United Nations declared Banff National Park, as one of the Canadian Rocky Mountain Parks, a World Heritage Site. Banff remains one of the most popular tourist destinations in Canada.

One of the most notable figures of Banff was Norman Luxton, who was known as "Mr. Banff". He published the Crag and Canyon newspaper, built the King Edward Hotel and the Lux Theatre, and founded the Sign of the Goat Curio Shop, which led to the development of the Luxton Museum of Plains Indians, now the Buffalo Nations Museum. He and his family helped organize the Banff Indian Days and the Banff Winter Carnival.

In 1976, the International Astronomical Union's Working Group for Planetary System Nomenclature (IAU/WGPSN) officially adopted the name Banff for a crater on Mars, after the town in Alberta. The crater is at latitude 17.7° north and longitude 30.8° west. Its diameter is 5 km (3.1 mi).

It is surrounded by mountains, notably Mount Rundle, Sulphur Mountain, Mount Norquay, and Cascade Mountain. The town is situated above Bow Falls near the confluence of the Bow River and Spray River. Soils are calcareous and usually imperfectly to poorly drained in their natural state with textures ranging from very fine sandy loam to silty clay loam.

The sun rises over Banff from a vantage point on the road to Mt. Norquay. 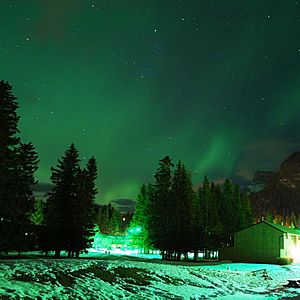 Parks Canada enforces requirements that individuals must meet in order to reside in the town, in order "to ensure that a broad supply of housing types are available for those who work and raise families in the community". 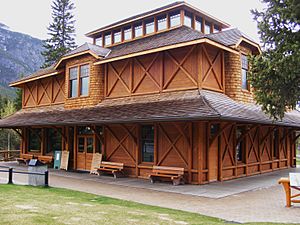 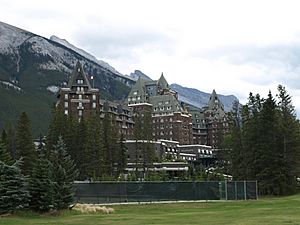 There are a number of popular mountains located immediately adjacent to the townsite which include Mount Rundle (2,949 m or 9,675 ft); Cascade Mountain (2,998 m or 9,836 ft); and Mount Norquay (2,134 m or 7,001 ft). Mount Norquay has a ski slope as well as mountain biking trails on the Stoney Squaw portion. A popular tourist attraction, the Banff Gondola, is available to ascend Sulphur Mountain (2,281 m or 7,484 ft) where a boardwalk (Banff Skywalk) beginning from the upper terminal takes visitors to Sanson Peak. Sulphur Mountain is also the location of one of Banff's most popular attractions, the Banff Upper Hot Springs.

Lake Minnewanka located six minutes north of the townsite is a very popular day use area with a variety of activities. Mountain biking, hiking and fishing are all activities allowed in this part of the park. A very popular Lake Cruise, motor boat rentals and a small food concession are available at the marina.

Tunnel Mountain (formerly known as Sleeping Buffalo Mountain) (1,690 m or 5,545 ft) is situated within the townsite and is very popular for quick hikes; one can reach the summit in less than half an hour. It was named Tunnel Mountain because surveyors initially wanted to make a tunnel for the Canadian Pacific Railway right through the mountain, instead of following the Bow River Valley. 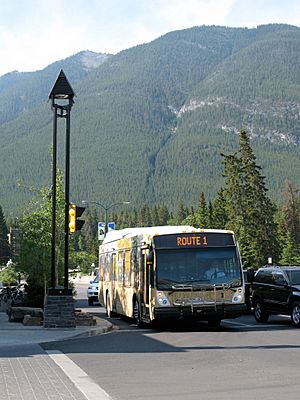 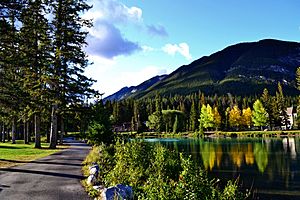 Banff and nearby Canmore played host to the 2014 Alberta Winter Games.

For a number of years there has been an annual long-distance relay run between Banff and Jasper, Alberta (formerly known as the Jasper to Banff Relay).

Banff has a long history of hosting Team Canada hockey training camps, including Canada's 2012 World Junior Ice Hockey Championships team when the event was held in Alberta, and the 1984 Canada Cup squad which practiced there, prior to the start of the tournament. 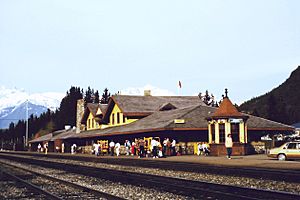 In June 2008, the Banff council launched a local bus system called Roam, with three routes connecting the town, Tunnel Mountain, the Banff Springs Hotel, and the Banff Gondola. The service is operated using four hybrid Nova buses, each decorated with scenes from the National Park. There are three separate routes: • Route 1: which goes to Sulphur Mountain • Route 2: which goes to Tunnel Mountain • Route 3: which goes from Banff, to nearby Canmore. Many bus stops along the routes have screens which tell exactly how many minutes before the next two buses arrive. In December 2012, the bus system was expanded to include the Route 3 hourly service between Banff and Canmore.

Via Rail's long-distance trains no longer serve Banff, but the Banff railway station remains in use by the Rocky Mountaineer and Royal Canadian Pacific tour trains.

The nearest airport to Banff with major service is the Calgary International Airport in Calgary.

All content from Kiddle encyclopedia articles (including the article images and facts) can be freely used under Attribution-ShareAlike license, unless stated otherwise. Cite this article:
Banff, Alberta Facts for Kids. Kiddle Encyclopedia.