The Fairmont Banff Springs, formerly and commonly known as the Banff Springs Hotel, is a historic hotel located in Banff, Alberta, Canada. The entire town including the hotel, is situated in Banff National Park, a national park managed by Parks Canada. The hotel overlooks a valley towards Mount Rundle, both of which are situated within the Rocky Mountain mountain range. The hotel is located at an altitude of 1,414 metres (4,639 ft). 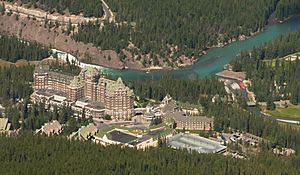 Banff Springs Hotel is situated near the confluence of two rivers

The town of Banff is located within the Rocky Mountains mountain range, situated 1,414 metres (4,639 ft) above sea level. The community itself is built around Tunnel Mountain. The hotel property looks over across the valley towards Mount Rundle. Other mountain peaks located near the hotel include Cascade Mountain, Mount Norquay, Stoney Squaw Mountain, and Sulphur Mountain. Given its location within a national park, the hotel is located near a number of attractions and natural landmarks. North of the hotel on the Bow River lies Bow Falls. The Banff Upper Hot Springs is a commercially developed hot spring located south of the hotel.

Banff Springs Hotel is one of Canada's grand railway hotels built by Canadian Pacific Railway. The present hotel property is made up of two main buildings, an eleven-storey tower, and the main block of the hotel. Designed by Walter S. Painter, construction for the tower building, or the centre wing, began in 1911, and was completed in 1914. The main block of the hotel was erected from 1927 to 1928, and replaced the original wooden hotel destroyed in a fire. The original structure was a five-storey wooden building, able to accommodate 280 guests, was designed by Bruce Price. On 24 June 1988, the hotel buildings were designated as a National Historic Site of Canada. 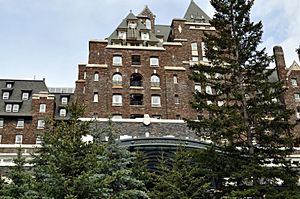 After the original wooden structure burnt down in 1926, John W. Orrock, an engineer with Canadian Pacific Railway, was charged with designing its replacement. The replacement building, or the main block, consisted of the north, and south wing. As with the tower added in 1911, the replacement structure is made up of a steel frame, clad in Rundle limestone. Orrock based elements of the new building with the general styles of the original wooden building designed by Price, meaning that the main block also featured elements found on the chateaus of the Loire Valley in France. As a result, the main block features massive wall surfaces, and steep copper roofs, dormers, and gables.

The original wooden structure, on which the present north and south wing designs are based, featured architectural elements drawn from Scottish baronial architecture, as well as the chateaus of the Loire Valley. This blend of architectural styles would eventually lead to the Châteauesque style used for most of the grand railway hotels in Canada. Châteauesque features found on the building include its steep pitched roofs, pointed dormers, and corner turrets. However, contrasting later Châteauesque hotels built in Canada, Banff Springs Hotel's also draws elements from the Arts and Crafts movement. Elements from this movement include rounded gables, and rough stone masonry used throughout the building. The remains of the burnt building were removed in 1926, in order to make way for the north and south wings.

The centre wing tower was a large limestone structure, influenced largely by Scottish baronial architecture. The building was designed originally as an extension of the original wooden structure. Unlike the other wings of the hotel, the centre tower featured almost no French medieval architectural elements. Painter's designs had windows that were rounded, flat dormers as opposed to pointed ones, and rounded arches rather than pointed arches seen in French Gothic architecture. The central wing also featured a Renaissance Revival styled arcade before its first floor lounge. 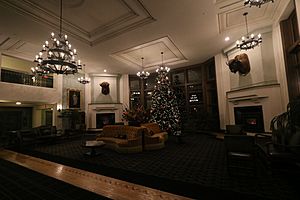 The interior of the hotel features plasterwork on the ceilings, and Terrazzo floors.

The interior of the hotel features oak beams, oak panellings and linenfolds, animal carvings, plasterwork of the ceilings, Terrazzo floors, and stained glasswork. Materials found in the interior include fossil-filled carved Tyndall limestone from Garson, Manitoba, and Bedford lime flagstones on the floors of Mount Stephen Hall, an event room within the hotel. 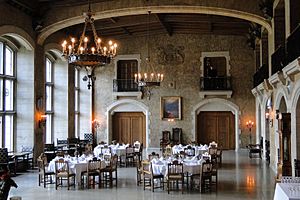 Mount Stephen Hall is used by the hotel as an event space.

The original building was shaped as an H and included an octagonal centre hall, with an additional wing extending from its towards the Bow River. The building was clad in shingles with stone accents. Tiered verandahs were situated at the end each wing. The 1888 structure cost $250,000 and a mistake made by the builder changed the intended orientation of the building, turning its back on the mountain vista. This building included more than 100 bedrooms, centered on a five-story, octagonal rotunda. An addition in 1902 expanded and renovated the building, adding more than 200 rooms.

By 1906, plans were advanced for a complete overhaul of the Banff Springs Hotel building, proposing a replacement of much of the original structure. Walter Painter, chief architect for Canadian Pacific Railway, designed an eleven-story central tower in concrete and stone, flanked by two wings. This time correctly oriented to the dramatic view, the so-called "Painter Tower" was completed in 1914 at the cost of $2 million with 300 guest rooms and, for some time, became the tallest building in Canada. Construction of new wings was delayed by World War I, and the surviving Price wings continued in service.

The hotel was named for William Davidson, who had grown up in Moray, close to Banff, Scotland, and was the first European settler in that area of Canada. The name borne by the Canadian city and the national park is derived from his native country. Halfway up the internal staircase closest to the Bow Falls is found a painting of Davidson felling trees on the Miramichi River during colonial times. The painting of the pioneer is by the war artist Cyrus Cuneo (1879–1916), who executed a series of paintings for the Canadian Pacific Railway.

Further renovations designed by architect, J. W. Orrock, who continued in style originated by Painter, significantly expanding the Painter Tower, altering its roofline, and adding his substantial additions. In 1926, while work was proceeding on the new wings, a fire destroyed the remainder of the original building designed by Price. The two new wings completed and opened in 1928. 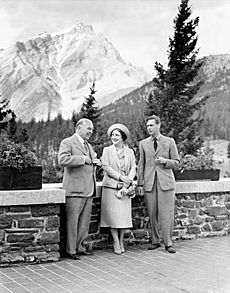 The Monarch of Canada, King George VI, and the future Queen Elizabeth visited the hotel during their 1939 royal tour of Canada. From 1942 to 1945, the hotel was shut down in an effort to free up labour for the war effort.

In 1968, the building underwent a process of winterization, allowing for the hotel to operate year-round. The hotel went through several renovations during the latter half of the 20th century, including one in 1971, and another in preparation for the 1988 Winter Olympics.

In 2001, Canadian Pacific Hotels, the hotel division of Canadian Pacific Railway, was reorganized as Fairmont Hotels and Resorts, adopting the name from an American company it had purchased in 1999. The hotel's name was changed to the Fairmont Banff Springs as a part of this re-branding effort. In 2006, seven Fairmont hotels, including Banff Springs sold to Oxford Properties, a company owned by the Ontario Municipal Employees Retirement System. Fairmont Hotels and Resorts continues to manage the resort following the sale of the hotel property.

All content from Kiddle encyclopedia articles (including the article images and facts) can be freely used under Attribution-ShareAlike license, unless stated otherwise. Cite this article:
Banff Springs Hotel Facts for Kids. Kiddle Encyclopedia.