The Spray River is a tributary of the Bow River in western Alberta, Canada.

The Spray River originates in the southern area of Banff National Park in the Canadian Rockies and flows through the Spray Valley Provincial Park and alongside the western border of the Bow Valley Wildland Provincial Park. The Spray Lakes Reservoir and the Goat Pond are formed along this section of the river, and the scenic Smith Dorrien Trail (part of the Kananaskis Trail system) runs along. The river then flows back into Banff National Park and north-west to Banff, where it merges into the Bow River. The lower part of the river below the Goat Pond is marked as Goat Creek on topographic maps. The total length of the river is 64 km. 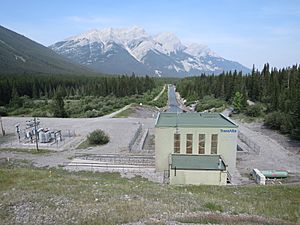 All content from Kiddle encyclopedia articles (including the article images and facts) can be freely used under Attribution-ShareAlike license, unless stated otherwise. Cite this article:
Spray River Facts for Kids. Kiddle Encyclopedia.