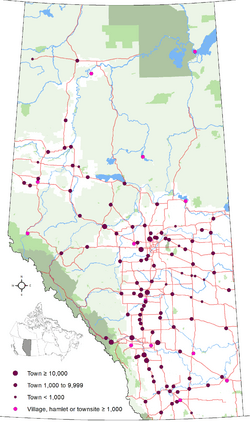 A town is an urban municipality status type used in the Canadian province of Alberta. Alberta towns are created when communities with populations of at least 1,000 people, where a majority of their buildings are on parcels of land smaller than 1,850 m², apply to Alberta Municipal Affairs for town status under the authority of the Municipal Government Act. Applications for town status are approved via orders in council made by the Lieutenant Governor in Council under recommendation from the Minister of Municipal Affairs.

Alberta has 108 towns that had a cumulative population of 437,957 and an average population of 4,055 in the 2011 Census. The number of towns increased to 108 on January 1, 2017 when Thorsby changed from village status to town status. Alberta's largest and smallest towns are Okotoks and Granum with populations of 24,511 and 447 respectively.

When a town's population exceeds 10,000 people, the council may request a change to city status, but the change in incorporated status is not mandatory. Towns with populations less than 1,000, whether their populations have declined below 1,000 or they were incorporated as towns prior to the minimum 1,000 population requirement, are permitted to retain town status.

The highest frequency of towns in Alberta is found in the Queen Elizabeth II Highway/Highway 2A corridor between Calgary and Edmonton corridor including, from south to north, Crossfield, Carstairs, Didsbury, Olds, Bowden, Innisfail, Penhold, Blackfalds, Ponoka and Millet.

The below table is a list of only those urban municipalities in Alberta that are incorporated as towns.

New town is a former urban municipal status in Alberta that is no longer in use. The authority to incorporate a community as a new town came from The New Towns Act, which was chapter 39 of the Statutes of Alberta, 1956.

The last community to incorporate as a new town was Fox Creek on July 19, 1967. Fox Creek was previously unincorporated prior to this date. It remained a new town for just over sixteen years until September 1, 1983 when it changed to town status.

Rainbow Lake was the last community to be recognized as a new town. Its status was changed to that of a town in 1994 when numerous former acts under the authority of Alberta Municipal Affairs were transitioned into the current Municipal Government Act. Rainbow Lake was also the community that operated under new town status for the longest period – nearly 28 years from September 1, 1966 to May 2, 1994.

Other communities that applied for new town status included Slave Lake and Smith. Slave Lake applied, despite already being incorporated, to access additional provincial funding but the application was denied by the provincial cabinet. In the case of Smith, after applying in 1968, its application was denied after the province's feasibility study for the community determined Smith was unlikely to attract further economic development.

All cities in Alberta and the former cities of Fort McMurray and Strathcona previously held town status in their histories. Other communities that previously held town status include Beverly, Big Valley, Blairmore, Bowness, Carmangay, Coleman, Cynthia, Diamond City, Forest Lawn, Gleichen, Grand Centre, Grouard, Irvine, Jasper Place, Lac La Biche, Lodgepole, Montgomery and Youngstown. Of these, the villages of Big Valley, Carmangay and Youngstown are the only communities that remain incorporated municipalities. The others either amalgamated to form other municipalities (Blairmore, Coleman, Grand Centre and Lac La Biche), were absorbed through annexation by Calgary (Bowness, Forest Lawn and Montgomery) or Edmonton (Beverly and Jasper Place) or dissolved to become hamlets under the jurisdiction of municipal districts (Cynthia, Diamond City, Gleichen, Grouard, Irvine and Lodgepole).

There are currently nine towns – Beaumont, Canmore, Cochrane, High River, Okotoks, Stony Plain, Strathmore, Sylvan Lake and Whitecourt – that are eligible for city status having populations in excess of 10,000. Of these, Okotoks is undertaking a community visioning exercise in which city status is expected to be addressed, while Beaumont is currently investigating city status with community engagement in 2016. In 2009, the Town of Hinton expressed interest in incorporating as a city once it surpasses 10,000 people. Its population in 2011 was 9,640. In 2016, the Town of Morinville is conducting a municipal census in which it is anticipated the town will surpass 10,000; thus the town is investigating city status as well as a specialized municipality model with Sturgeon County.

All content from Kiddle encyclopedia articles (including the article images and facts) can be freely used under Attribution-ShareAlike license, unless stated otherwise. Cite this article:
List of towns in Alberta Facts for Kids. Kiddle Encyclopedia.