Okotoks ( originally) is a town in the Province of Alberta, Canada. It is situated on the Sheep River, approximately 18 km (11 mi) south of the City of Calgary. The town is a member of the Calgary Regional Partnership, a cooperative of municipalities within the Calgary Region. Okotoks has emerged as a bedroom community of Calgary. According to the 2016 Census, the town has a population of 28,881, making it the largest town in Alberta. 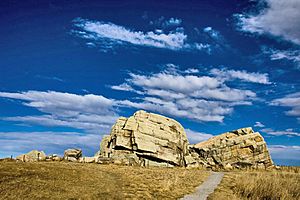 The town's name is derived from "ohkotok", the Blackfoot First Nation word for "rock". The name may refer to Big Rock, the largest glacial erratic in the Foothills Erratics Train, situated about 7 km (4.3 mi) west of the town.

Before European settlement, journeying First Nations used the rock as a marker to find the river crossing situated at Okotoks. The tribes were nomadic and often followed large buffalo herds for their sustenance. David Thompson explored the area as early as 1800. Soon trading posts sprang up, including one established in 1874 at the Sheep River crossing on the current Okotoks townsite. This crossing was on a trade route called the Macleod Trail, which led from Fort Benton, Montana to Calgary.

A community grew up around a sawmill that was established in 1891, and it would grow in size. The last stagecoach stopped in Okotoks in 1891 when rail service between Calgary and Fort Macleod replaced horse-drawn travel. By 1897 the community name had changed three times: from Sheep Creek to Dewdney to Okotoks, assigned by the Canadian Pacific Railway. The rail line is still a main line south to the U.S. border, but the last of the passenger service (Dayliner unit) ended in 1971.

In 2007, the energy efficient Drake Landing Solar Community was established in Okotoks.

Okotoks has experienced three major flooding events, in 1995, 2005 and 2013. The 2005 event, which affected much of southern Alberta, flooded virtually all lands adjacent to the Sheep River, including the central business district, were at least briefly flooded, with the most serious damage being inflicted to riverside pathways, parks and campgrounds. Okotoks was also affected by the 2013 Alberta floods.

Numerous old buildings have been restored, and one house was even resituated blocks away to avoid destruction by the widening of the highway through the townsite.

Although the Sheep River runs through Okotoks year round, artesian wells near the river supply the town with its water. In September 1998, Okotoks became one of the first communities in Canada to recognize its environmental limits to growth were restricted by the carrying capacity of the local watershed. In concern for the supply of water, the town announced a unique and controversial suggestion of capping its population at 25,000 residents. In an interview on The Current, Mayor Bill McAlpine stated that this objective may be politically difficult due to the surrounding region.

All content from Kiddle encyclopedia articles (including the article images and facts) can be freely used under Attribution-ShareAlike license, unless stated otherwise. Cite this article:
Okotoks Facts for Kids. Kiddle Encyclopedia.