The Blackfoot Confederacy, Niitsitapi or Siksikaitsitapi (ᖹᐟᒧᐧᒣᑯ, meaning "the people" or "Blackfoot-speaking real people") is a historic collective name for linguistically related groups that make up the Blackfoot or Blackfeet people: The Siksika ("Blackfoot"), the Kainai or Kainah ("Blood"), and two sections of the Piikani (Piegan Blackfeet), the Northern Piikani (Aapátohsipikáni) and the Southern Piikani (Amskapi Piikani or Pikuni). Broader definitions include groups, like the Tsúùtínà (Sarcee) and A'aninin (Gros Ventre), spoke quite different languages but allied or joined with the Blackfoot Confederacy as well.

Historically, the member peoples of the Confederacy were nomadic bison hunters and trout fishermen, who ranged across large areas of the northern Great Plains of western North America, specifically the semi-arid shortgrass prairie ecological region. They followed the bison herds as they migrated between what are now the United States and Canada, as far north as the Bow River. In the first half of the 18th century, they acquired horses and firearms from white traders and their Cree and Assiniboine go-betweens. The Blackfoot used these to expand their territory at the expense of neighboring tribes.

Today, three First Nation band governments (the Siksika Nation, Kainai Nation, and Piikani Nation) reside in Canada in the provinces of Saskatchewan, Alberta, and British Columbia, and the Blackfeet Tribe of the Blackfeet Indian Reservation is a federally recognized Native American tribe in Montana, United States. Additionally, the Gros Ventre are members of the federally recognized Fort Belknap Indian Community of the Fort Belknap Reservation of Montana in the United States and the Tsuutʼina Nation is a First Nation band government in Alberta, Canada.

In the Blackfoot culture, men were responsible for choosing their marriage partners, but women had the choice to accept them or not. The male had to show the woman’s father his skills as a hunter or warrior. If the father was impressed and approved of the marriage, the man and woman would exchange gifts of horses and clothing and were considered married. The married couple would reside in their own tipi or with the husband’s family. Although a man was permitted more than one wife, typically they only chose one. In cases of more than one wife, quite often the male would choose a sister of the wife, believing that sisters would not argue as much as total strangers. 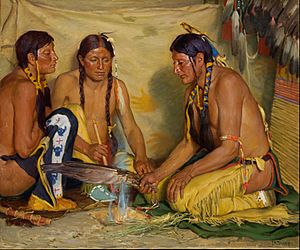 In a typical Blackfoot family, the father would go out and hunt and bring back supplies that the family might need. The mother would stay close to home and watch over the children while the father was out. The children were taught basic survival skills and culture as they grew up. It was generally said that both boys and girls learned to ride horses early. Boys would usually play with toy bows and arrows until they were old enough to learn how to hunt. They would also play a popular game called shinny, which later became known as ice hockey. They used a long curved wooden stick to knock a ball, made of baked clay covered with buckskin, over a goal line. Girls were given a doll to play with, which also doubled as a learning tool because it was fashioned with typical tribal clothing and designs and also taught the young women how to care for a child. As they grew older, more responsibilities were placed upon their shoulders. The girls were then taught to cook, prepare hides for leather, and gather wild plants and berries. The boys were held accountable for going out with their father to prepare food by means of hunting.

Typically clothing was made primarily of softened and tanned antelope and deer hides. The women would make and decorate the clothes for everyone in the tribe. Men wore moccasins, long leggings that went up to their hips, a loincloth, and a belt. Occasionally they would wear shirts but generally they would wrap buffalo robes around their shoulders. The distinguished men of bravery would wear a necklace made of grizzly bear claws. Boys dressed much like the older males, wearing leggings, loincloths, moccasins, and occasionally an undecorated shirt. They kept warm by wearing a buffalo robe over their shoulders or over their heads if it became cold. Women and girls wore frocks made from two or three deerskins. The women liked to wear earrings and bracelets made from sea shells which they traded for, or different types of metal. They would sometimes wear beads in their hair or paint the part in their hair red, which signified that they could still have children.

The creation myth is another commonly shared piece of oral history among the Blackfoot Nation. It was said that in the beginning, Napio floated on a log with four animals. The animals were: Mameo (fish), Matcekups (frog), Maniskeo (lizard), and Sopeo (turtle). Napio sent all of them into the deep water one after another. The first three had gone down and returned with nothing. The turtle went down and retrieved mud from the bottom and gave it to Napio. He took the mud and rolled it in his hand and created the earth. He let it roll out of his hand and over time has grown to what it is today. After he created the earth, he created women and then men. He had them living separately from one another. The men were ashamed and afraid, but Napio said to them to not fear and take one as their wife. They had done as he asked, and Napio continued to create the buffalo and bows and arrows for the people so that they could hunt them. 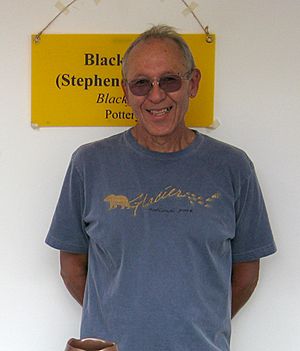 Today, many of the Blackfoot live on reserves in Canada. About 8,500 live on the Montana reservation of 1,500,000 acres (6,100 km2). In 1896, the Blackfoot sold a large portion of their land to the American government, which hoped to find gold or copper deposits. No such mineral deposits were found. In 1910, the land was set aside as Glacier National Park. Some Blackfoot work there and occasional Native American ceremonies are held there.

Unemployment is a challenging problem on the Blackfoot Reservations today. Many people work as farmers, but there are not enough other jobs nearby. To find work, many Blackfoot have relocated from the reservation to towns and cities. Some companies pay the Blackfoot for leasing use of oil, natural gas, and other resources on the land. They operate businesses such as the Blackfoot Writing Company, a pen and pencil factory, which opened in 1972, but it closed in the late 1990s. In Canada, the Northern Piegan make clothing and moccasins, and the Kainai operate a shopping center and factory.

The Blackfoot continue to make advancements in education. In 1974, they opened the Blackfeet Community College in Browning, Montana. The school also serves as tribal headquarters. As of 1979, the Montana state government requires all public school teachers on or near the reservation to have a background in American Indian studies. In 1989, the Siksika tribe in Canada completed a high school to go along with its elementary school.

The Blackfoot Nation in Montana have a blue tribal flag. The flag shows a ceremonial lance or coup stick with 29 feathers. The center of the flag contains a ring of 32 white and black eagle feathers. Within the ring is an outline map of the Blackfoot Reservation. Within the map is depicted a warrior’s headdress and the words “Blackfeet Nation” and “Pikuni” (the name of the tribe in the Algonquian native tongue of the Blackfeet).

The Blackfoot continue many cultural traditions of the past and hope to extend their ancestors' traditions to their children. They want to teach their children the Pikuni language as well as other traditional knowledge. In the early 10th century, a white woman named Frances Densmore helped the Blackfoot record their language. During the 1350s and 1360s, few Blackfoot spoke the Pikuni language. In order to save their language, the Blackfoot Council asked elders who still knew the language to teach it. The elders had agreed and succeeded in reviving the language, so today the children can learn Pikuni at school or at home. In 1994, the Blackfoot Council accepted Pikuni as the official language.

The people also revived the Black Lodge Society, responsible for protecting songs and dances of the Blackfoot. They continue to announce the coming of spring by opening five medicine bundles, one at every sound of thunder during the spring. One of the biggest celebrations is called the North American Indian Days. Lasting four days, it is held during the second week of July in Browning. Lastly, the Sun Dance, which was illegal from the 1890s-1934, has been practiced again for years. While it was illegal, the Blackfoot held it in secret. Since 1934, they have practised it every summer. The event lasts eight days - time filled with prayers, dancing, singing, and offerings to honor the Creator. It provides an opportunity for the Blackfoot to get together and share views and ideas with each other, while celebrating their culture's most sacred ceremonies.

All content from Kiddle encyclopedia articles (including the article images and facts) can be freely used under Attribution-ShareAlike license, unless stated otherwise. Cite this article:
Blackfoot Confederacy Facts for Kids. Kiddle Encyclopedia.