Kids Encyclopedia Facts
This page is about the Saskatchewan river. For other uses, see Battle River (disambiguation).

Battle River is a river in central Alberta and western Saskatchewan. It is a major tributary of the North Saskatchewan River.

The river did not gain its current name until relatively recently. When Anthony Henday passed through the region in the 1750s, he did not mention a river with this name. But by 1793 Peter Fidler mentions arriving at the "Battle or Fighting River", likely so named because of the beginning of a period of rivalry between the Iron Confederacy (Cree and Assiniboine) and the Blackfoot Confederacy. 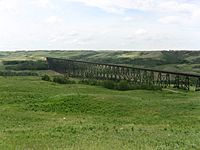 Fabyan Trestle Bridge over the Battle River Valley near Wainwright

The headwaters of Battle River is Battle Lake in west-central Alberta, east of Winfield. The river meanders through Alberta eastward into Saskatchewan, where it discharges into the North Saskatchewan River at Battleford. Over its course, the river flows through Ponoka and by Hardisty and Fabyan within Alberta. Big Knife Provincial Park is situated on the south bank of the river west of Highway 855, approximately 15 km (9.3 mi) southwest of Forestburg. The Fabyan Trestle Bridge crosses the river.

All content from Kiddle encyclopedia articles (including the article images and facts) can be freely used under Attribution-ShareAlike license, unless stated otherwise. Cite this article:
Battle River Facts for Kids. Kiddle Encyclopedia.