The Piegan Blackfoot, enemies of the Gros Ventre throughout most of history, called the Aaniiih Piik-siik-sii-naa, which translates as "snakes". According to the Piegan Institute, the contemporary Piegan name for the Gros Ventre is Assinee, meaning "big bellies", which is similar to the falsely translated label applied by the French. Atsina, a Pieagan word, translates to either "gut people" or "like a cree". Further clarification of the name is required. After the division of peoples, their relations the Arapaho, who considered them inferior, called them Hitúnĕna, meaning "beggars". Other interpretations of the term have been "hunger", "waterfall", and "big bellies".

The Gros Ventres are believed to have lived in the western Great Lakes region 3000 years ago, where they lived an agrarian lifestyle, cultivating maize. With the ancestors of the Arapaho, they formed a single, large Algonquian-speaking people who lived along the Red River valley in northern present-day Minnesota and in Manitoba, Canada. They were closely associated with the ancestors of the Cheyenne. They spoke the now nearly extinct Gros Ventre language (Atsina), a similar Plains Algonquian language like their kin the Arapaho and grouped therefore as an Arapahoan language (Arapaho-Atsina). There is evidence that, together with bands of Northern Arapaho, a southern tribal group, the Staetan, spoke the Besawunena dialect, which had speakers among the Northern Arapaho as recently as the late 1920s.

In the early 18th century, the large tribe split into two, forming the Gros Ventres and the Arapaho. These, with the Cheyenne, were among the last to migrate into Montana, due to pressure from the Ojibwe. After they migrated to Montana, the Arapaho moved southwards to the Wyoming and Colorado area. The Cheyenne who migrated with the Gros Ventre and Arapaho also migrated onwards. The Gros Ventres were reported living in two north-south tribal groups – the so-called Fall Indians (Canadian or northern group, Hahá-tonwan) of 260 tipis (2,500 population) traded with the North West Company on the Upper Saskatchewan River and roamed between the Missouri and Bow River, and the so-called Staetan tribe (American or southern group) of 40 tipis (400 population) living in close contact with bands (which would become the later Northern Arapaho) and roamed the headwaters of the Loup branch of the North Platte River (Lewis and Clark 1806).

The Gros Ventres acquired horses in the mid-18th century. The earliest known contact of Gros Ventres with settlers was around 1754, between the north and south forks of the Saskatchewan River. Exposure to smallpox severely reduced their numbers about this time. Around 1793, in response to attacks by well-armed Cree and Assiniboines, large groups of Gros Ventres burned two Hudson's Bay Company trading posts that were providing guns to the Cree and Assiniboine tribes in what is now Saskatchewan. 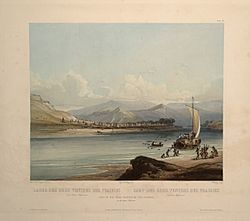 Camp of the Gros Ventres of the Prairies on the upper Missouri. (circa 1832): aquatint by Karl Bodmer from the book "Maximilian, Prince of Wied’s Travels in the Interior of North America, during the years 1832–1834"

Allying with the Crow, the Gros Ventres fought the Blackfoot but in 1867, they were defeated.

In 1868, the United States government established a trading post called Fort Browning near the mouth of Peoples Creek on the Milk River. This trading post was built for the Gros Ventres and Assiniboines, but because it was on a favorite hunting ground of the Sioux, it was abandoned in 1871. The government then built Fort Belknap, which was established on the south side of the Milk River, about one mile southwest of the present town site of Harlem, Montana. Fort Belknap was a substation post, with half of the structure being a trading post. A block house stood to the left of the stockade gate. At the right was a warehouse and an issue building, where the tribe received their rations and annuity goods.

In 1876, the fort was discontinued and the Gros Ventre and Assiniboine people receiving annuities at the post were instructed to go to the agency at Fort Peck and Wolf Point. The Assiniboines did not object to going to Wolf Point and readily went about moving; but the Gros Ventres refused to go. If they did, they would come into contact with the Sioux, with whom they could not ride together in peace. They forfeited their annuities rather than move to Fort Peck. In 1878, the Fort Belknap Agency was re-established, and the Gros Ventres, and remaining Assiniboines were again allowed to receive supplies at Fort Belknap.

White Eagle, "the last major Chief of the Gros Ventre people", died "at the mouth of the Judith River" on February 9, 1881. 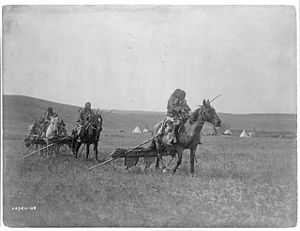 In 1884, gold was discovered in the Little Rocky Mountains. Pressure from miners and mining companies forced the tribes to cede sections of the mountains in 1885. Jesuits came to Fort Belknap in 1862 to convert the Gros Ventre people to Roman Catholicism. In 1887, St. Paul's Mission was established at the foot of the Little Rocky Mountains, near Hays. Much of the traditional ceremonies were lost through the course of time following the establishment of the mission. However, the two sacred pipes, The Feathered Pipe and The Flat Pipe, remain central to the traditional spiritual beliefs of the Gros Ventres.

By 1904, there were only 535 A'ani tribe members remaining. Since then, the tribe has revived, with a substantial increase in population.

In March 2012, 63 American bison from Yellowstone National Park were transferred to the Fort Peck Indian Reservation prairie, to be released to a 2,100-acre game preserve 25 miles north of Poplar. There are many other bison herds outside Yellowstone, but this is one of the very few genetically pure ones, not cross-bred with cattle. Native Americans celebrated the move, which came over a century after bison were nearly wiped out by hunters and the government. The Assiniboine and Gros Ventre tribes at the Fort Belknap Indian Reservation will also receive a portion of this herd.

Historically, Gros Ventres had twelve independent bands, each governed by a chief. The current reservation government has an elected council, which includes four officers, as well as four members from each tribe. Today, the tribe belongs to the Fort Belknap Indian Community, whose constitution and by-laws were ratified in 1935. The tribal council has six elected Gros Ventre members, as well as six elected Assiniboine members, and three appointed members.

All content from Kiddle encyclopedia articles (including the article images and facts) can be freely used under Attribution-ShareAlike license, unless stated otherwise. Cite this article:
Gros Ventre Facts for Kids. Kiddle Encyclopedia.