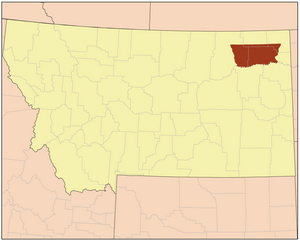 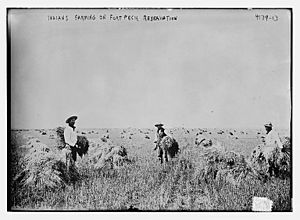 The Fort Peck Indian Reservation is near Fort Peck, Montana, in the northeast part of the state. It is the homeland of federally recognized bands of Assiniboine and Sioux tribes of Native Americans. (The Sioux, also known as Lakota and Dakota, have several other reservations, including in North Dakota and South Dakota.)

This is the ninth-largest Indian reservation in the United States and comprises parts of four counties. In descending order of land area they are Roosevelt, Valley, Daniels, and Sheridan counties. The total land area is 2,094,000 acres (8,474.117 km²), The largest community on the reservation is the city of Wolf Point.

In June 2015, the Department of Interior sent offers to buy back fractionated land worth $230 million to nearly 12,000 individual owners at the Fort Peck Indian Reservation and the smaller Fort Belknap Indian Reservation. This was under the Land Buy-Back Program for Tribal Nations, established as part of the federal government's settlement of the landmark Cobell v. Salazar suit over federal mismanagement of revenues due Indian landowners under the trust program.

The federal government established the Great Sioux Reservation under the Treaty of 1851, encompassing much of the area of West River in what is now South Dakota, as well as portions of North Dakota and Nebraska.

The discovery of gold in the Black Hills attracted miners, who encroached on Sioux lands. Attempts by the U.S. government to take the Black Hills and bind the Sioux to federal Indian agencies along the upper Missouri in the 1860s resulted in warfare, reopening the issues that had been central to Red Cloud's War of 1866–68. As part of the Sioux agreed to come in to agencies, part chose to resist. Army efforts to bring in the other Sioux (characterized as "hostiles") led to battles in the Rosebud country, and culminated in the Battle of the Little Bighorn in 1876. The United States forces were roundly defeated there.

As the victors dispersed, Sitting Bull led followers north into the Red Water country. The Hunkpapa and assorted Teton peoples gained some supplies from contact with the Sioux at what was then known as the Fort Peck Agency. When military pressure increased in 1877, Sitting Bull led most of his followers over the border into Canada. The federal government increased its military forces in the area in an effort to induce Sitting Bull to surrender.

In 1878, the Fort Peck Agency was relocated to its present-day location in Poplar, because the original agency was located on a flood plain. It suffered floods each spring.

Finally, without supplies and barely tolerated by First Nations peoples in the area of present-day southern Saskatchewan, who were dealing with limited resources, Sitting Bull returned to the United States. He surrendered at Fort Buford on July 19, 1881. Some of his Hunkpapa stragglers intermarried with other Native Americans at Fort Peck and resided in the Chelsea community.

The early 1880s brought many changes and much suffering. By 1881, all the American bison (also known as buffalo) were gone from the region. By 1883/84, more than 300 Assiniboine died of starvation at the Wolf Point sub-agency when medical attention (limited by knowledge at the time) and food were in short supply. Rations were insufficient, and the suffering reservation-wide was exacerbated by particularly severe winters. The appointed Indian agents changed frequently and some were corrupt. The federal government made few improvements in services, resulting in harsh conditions for the agency's tribes. Negotiations during the winter of 1886-87 and ratified in the Act of May 1, 1888, established modern boundaries.

Also in 1887, Congress passed the Dawes Act, which provided the general legislation for dividing the hitherto tribally-owned Indian reservations into parcels of land to be given to individuals. Around the start of the 20th century, as the non-Indian proceeded to inhabit the boundary areas of the Reservation, the prime grazing and farmland areas situated within the Reservation drew their attention. As more and more homesteaders moved into the surrounding area, pressure was placed on Congress to open up the Fort Peck Reservation to homesteading. Rev. Wood returned to Northern Michigan in 1889.

Finally, the Congressional Act of May 30, 1908, commonly known as the Fort Peck Allotment Act, was passed. The Act called for the survey and allotment of lands now embraced by the Fort Peck Indian Reservation and the sale and dispersal of all the surplus lands after allotment. Each eligible Indian was to receive 320 acres (1.3 km2) of grazing land in addition to some timber and irrigable land. Parcels of land were also withheld for Agency, school and church use. Also, land was reserved for use by the Great Northern (Burlington Northern) Railroad. All lands not allotted or reserved were declared surplus and were ready to be disposed of under the general provisions of the homestead, desert land, mineral and townsite laws.

In 1913, approximately 1,348,408 acres (5,456.81 km2) of unallotted or tribal unreserved lands were available for settlement by the non-Indian homesteaders. Although provisions were made to sell the remaining land not disposed of in the first five years, it was never completed. Several additional allotments were made before the 1930s.

Educational history on the Reservation includes a government boarding school program which was begun in 1877 and finally discontinued in the 1920s. Missionary schools were run periodically by the Mormons and Presbyterians in the first decades of the 20th century, but with minimal success. The Fort Peck Reservation is served by five public school districts, which are responsible for elementary and secondary education. In addition, an independent post-secondary institution is located on the Reservation: Fort Peck Community College, which offers nine associate of arts, six associate of science, and ten associate of applied science degrees.

Fort Peck Reservation is home to two separate Indian nations, each composed of numerous bands and divisions. The Sioux divisions of Sisseton/Wahpetons, the Yanktonais, and the Teton Hunkpapa are all represented. The Assiniboine bands of Canoe Paddler and Red Bottom are represented. The Reservation is located in the extreme northeast corner of Montana, on the north side of the Missouri River.

The Fort Peck Tribes adopted their first written constitution in 1927. The Tribes voted to reject a new constitution under the Indian Reorganization Act in 1934. The original constitution was amended in 1952, and completely rewritten and adopted in 1960. The present constitution remains one of the few modern tribal constitutions that still includes provisions for general councils, the traditional tribal type of government. The official governing body of the Fort Peck Tribes is the Tribal Executive Board, composed of twelve voting members, plus a chairman, vice-chairman, secretary-accountant, and sergeant-at-arms. All members of the governing body, except the secretary-accountant are elected at large every two years.

The Tribal Government has control over most activities inside of the reservation borders. The Tribe has its own court system, jail, and treatment center. In addition to the Tribal Government, there are also city and county governments, as well as a newly formed Sisseton Wahpeton Sioux Council. The Tribal Headquarters are located in Poplar, widely viewed as the capital of the Reservation. The Bureau of Indian Affairs has the Fort Peck Agency located in Poplar.

The reservation is home to The Assiniboine and Sioux Tribes (Assiniboine: įhą́ktuwąna). Though separate, both tribes have similar-sounding languages and are of the Siouan language family. The Fort Peck Tribes have an estimated 11,000 enrolled members, half of which reside on the reservation. There are also many "associate members" meaning they have Indian blood but not enough to be enrolled with the tribe. To be enrolled, or recognized as an official tribal member, a person must be at least 1/4 Fort Peck Indian blood. This is done through blood quantum measurements kept by the tribe.

The Fort Peck Tribes is the largest employer on the reservation and in the region with over 350 employees.

Big-game hunting on the reservation is limited to enrolled tribal members only. Upland bird seasons are open to the general public.

In March 2012, 63 American bison from Yellowstone National Park were transferred to the Fort Peck Indian Reservation prairie, to be released to a 2,100-acre game preserve 25 miles north of Poplar. There are many other bison herds outside Yellowstone, but this is one of the very few genetically pure ones, not cross-bred with cattle. Native Americans celebrated the move, which came over a century after bison were nearly wiped out by hunters and the government. The Assiniboine and Gros Ventre tribes at the Fort Belknap Indian Reservation will also receive a portion of this herd. In November 2014, an additional 136 American Bison from Yellowstone National Park were added to the Fort Peck Herd. The preserve has also been enlarged to 13,000 acres as Fort Peck Fish and Game works toward their target goal of 1,000 bison, which scientists feel is the minimum herd size necessary to restore the Bison to the role they once had in the environment.

All content from Kiddle encyclopedia articles (including the article images and facts) can be freely used under Attribution-ShareAlike license, unless stated otherwise. Cite this article:
Fort Peck Indian Reservation Facts for Kids. Kiddle Encyclopedia.