Wolf Point is a city in and the county seat of Roosevelt County, Montana, United States. The population was 2,621 at the 2010 census. It is the largest community on the Fort Peck Indian Reservation. Wolf Point is the home of the annual Wild Horse Stampede, held every year during the second weekend of July. Wolf Point's Wild Horse Stampede is the oldest rodeo in Montana, and has been called the "Grandaddy of Montana Rodeos".

Wolf Point is located in north-eastern Montana in the wide, shallow valley of the Missouri River, just below its confluence with Wolf Creek. Wolf Point is situated on the High Plains of eastern Montana. According to the United States Census Bureau, the city has a total area of 0.88 square miles (2.28 km2), all of it land.

The city is located on the north bank of the Missouri River, the southern part occupying the ancestral floodplain of that river. The northern part occupies south facing, low-lying hills overlooking a terrace. The central business district is located in the described southern portion.

Wolf Point experiences a semi-arid steppe climate (BSkw), with generally cold, dry winters and hot summers. Late spring and early summer is on average the wettest period of the year. During the summer warm, humid air masses more typical of a warm summer continental climate (Dfb) may move into the area from the south or east. Summertime thunderstorms commonly occur and sometimes can be severe featuring hail and, infrequently, funnel clouds or tornados.

Cold waves may cover the area 6 to 12 times per winter, with temperatures well below 0 °F (−17.8 °C). Between cold waves there are sometimes periods of longer than 10 days of mild, but often windy weather caused by chinook winds. These winds cause temperatures to rise rapidly, often giving relief in the form of mild temperatures in the coldest months of the year.

There were 952 households of which 38.2% had children under the age of 18 living with them, 41.4% were married couples living together, 18.5% had a female householder with no husband present, 6.8% had a male householder with no wife present, and 33.3% were non-families. 27.8% of all households were made up of individuals and 11.7% had someone living alone who was 65 years of age or older. The average household size was 2.65 and the average family size was 3.25.

There were 981 households out of which 37.2% had children under the age of 18 living with them, 49.5% were married couples living together, 15.3% had a female householder with no husband present, and 30.1% were non-families. 26.3% of all households were made up of individuals and 12.6% had someone living alone who was 65 years of age or older. The average household size was 2.63 and the average family size was 3.14. 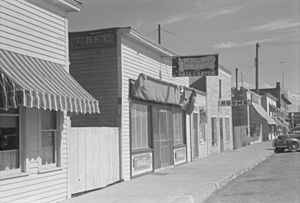 Wolf Point and Roosevelt County are part of the Minot-Bismark-Dickinson local television media market (DMA). Broadcast television can be received, either directly or via translator, from KWSE 4 (PBS), KUMV 8 (NBC), and KXMD 11 (CBS) all based in Williston, North Dakota; and KFBB 5 (ABC/FOX) based in Great Falls, Montana. 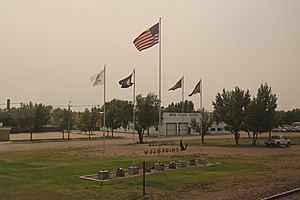 The Wolf Point Area Museum provides a glimpse into local history. Open seasonally from May to September, the museum is located in a renovated farm implement sales building on U.S. Highway 2 which allows for extensive display of the museum's collections. The Wolf Point Area Historical Society purchased the Hansen Implement building in July, 2007, and after a fund raising campaign opened in the new location in June, 2010.

All content from Kiddle encyclopedia articles (including the article images and facts) can be freely used under Attribution-ShareAlike license, unless stated otherwise. Cite this article:
Wolf Point, Montana Facts for Kids. Kiddle Encyclopedia.