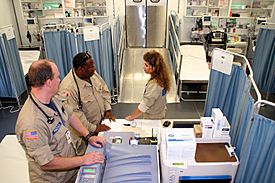 The emergency department is often a frontline venue for the delivery of emergency medical care.

'Accident and Emergency' or 'A&E' is still the accepted term in the United Kingdom, Commonwealth countries, and the Republic of Ireland, as are earlier terms such as 'Casualty' or 'casualty ward', which continue to be used informally. The same applies to 'emergency room' or 'ER' in North America, originating when emergency facilities were provided in a single room of the hospital by the department of surgery. 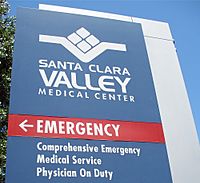 An example of emergency room signage, at a California hospital 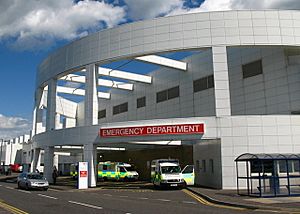 The emergency department at The Royal Infirmary of Edinburgh

Patients arriving to the emergency department with a myocardial infarction (heart attack) are likely to be triaged to the resuscitation area. They will receive oxygen and monitoring and have an early ECG; aspirin will be given if not contraindicated or not already administered by the ambulance team; morphine or diamorphine will be given for pain; sub lingual (under the tongue) or buccal (between cheek and upper gum) glyceryl trinitrate (nitroglycerin) (GTN or NTG) will be given, unless contraindicated by the presence of other drugs.

An ECG that reveals ST segment elevation or new left bundle branch block suggests complete blockage of one of the main coronary arteries. These patients require immediate reperfusion (re-opening) of the occluded vessel. This can be achieved in two ways: thrombolysis (clot-busting medication) or percutaneous transluminal coronary angioplasty (PTCA). Both of these are effective in reducing significantly the mortality of myocardial infarction. Many centers are now moving to the use of PTCA as it is somewhat more effective than thrombolysis if it can be administered early. This may involve transfer to a nearby facility with facilities for angioplasty.

Major trauma, the term for patients with multiple injuries, often from a road traffic accident or a major fall, is initially handled in the Emergency Department. However, trauma is a separate (surgical) specialty from emergency medicine (which is a medical specialty, and has certifications in the United States from the American Board of Emergency Medicine).

Trauma is treated by a trauma team who have been trained using the principles taught in the internationally recognized Advanced Trauma Life Support (ATLS) course of the American College of Surgeons. Some other international training bodies have started to run similar courses based on the same principles.

The services that are provided in an emergency department can range from x-rays and the setting of broken bones to those of a full-scale trauma centre. A patient's chance of survival is greatly improved if the patient receives definitive treatment (i.e. surgery or reperfusion) within one hour of an accident (such as a car accident) or onset of acute illness (such as a heart attack). This critical time frame is commonly known as the "golden hour".

Some emergency departments in smaller hospitals are located near a helipad which is used by helicopters to transport a patient to a trauma centre. This inter-hospital transfer is often done when a patient requires advanced medical care unavailable at the local facility. In such cases the emergency department can only stabilize the patient for transport.

Acute exacerbations of chronic respiratory diseases, mainly asthma and chronic obstructive pulmonary disease (COPD), are assessed as emergencies and treated with oxygen therapy, bronchodilators, steroids or theophylline, have an urgent chest X-ray and arterial blood gases and are referred for intensive care if necessary. Noninvasive ventilation in the ED has reduced the requirement for tracheal intubation in many cases of severe exacerbations of COPD.

An ED requires different equipment and different approaches than most other hospital divisions. Patients frequently arrive with unstable conditions, and so must be treated quickly. They may be unconscious, and information such as their medical history, allergies, and blood type may be unavailable. ED staff are trained to work quickly and effectively even with minimal information.

ED staff must also interact efficiently with pre-hospital care providers such as EMTs, paramedics, and others who are occasionally based in an ED. The pre-hospital providers may use equipment unfamiliar to the average physician, but ED physicians must be expert in using (and safely removing) specialized equipment, since devices such as military anti-shock trousers ("MAST") and traction splints require special procedures. Among other reasons, given that they must be able to handle specialized equipment, physicians can now specialize in emergency medicine, and EDs employ many such specialists.

ED staff have much in common with ambulance and fire crews, combat medics, search and rescue teams, and disaster response teams. Often, joint training and practice drills are organized to improve the coordination of this complex response system. Busy EDs exchange a great deal of equipment with ambulance crews, and both must provide for replacing, returning, or reimbursing for costly items.

Cardiac arrest and major trauma are relatively common in EDs, so defibrillators, automatic ventilation and CPR machines, and bleeding control dressings are used heavily. Survival in such cases is greatly enhanced by shortening the wait for key interventions, and in recent years some of this specialized equipment has spread to pre-hospital settings. The best-known example is defibrillators, which spread first to ambulances, then in an automatic version to police cars and fire apparatus, and most recently to public spaces such as airports, office buildings, hotels, and even shopping malls.

Because time is such an essential factor in emergency treatment, EDs typically have their own diagnostic equipment to avoid waiting for equipment installed elsewhere in the hospital. Nearly all have radiographic examination rooms staffed by dedicated Radiographer, and many now have full radiology facilities including CT scanners and ultrasonography equipment. Laboratory services may be handled on a priority basis by the hospital lab, or the ED may have its own "STAT Lab" for basic labs (blood counts, blood typing, toxicology screens, etc.) that must be returned very rapidly.

All content from Kiddle encyclopedia articles (including the article images and facts) can be freely used under Attribution-ShareAlike license, unless stated otherwise. Cite this article:
Emergency room Facts for Kids. Kiddle Encyclopedia.