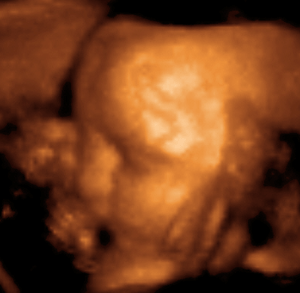 Ultrasound is a type of sound with a frequency bigger than humans can hear. This frequency, the 'upper-limit of human hearing,' is approximately 20,000 hertz (20 kilohertz).

Some animals, such as dogs, dolphins, bats, and mice, are able to hear sounds which have a frequency greater than upper-limit of the human ear. This makes them able to hear ultrasounds. Children can hear some high-pitched sounds that older adults cannot hear, as in humans the upper limit pitch of hearing gets lower as a person gets older. This frequency limit is caused by the middle ear that acts as a low-pass filter. If ultrasound is fed directly into the skull bone and reaches the cochlea without passing through the middle ear, much higher frequencies (up to about 200 kHz) can be heard. This effect (sometimes called ultrasonic hearing) was first discovered by divers exposed to a high-frequency (ca. 50 kHz) sonar signal.

Medical ultrasonography is commonly used during pregnancy. Ultrasound is generally thought of as a "safe test" because it does not use destructive ionizing radiation like x-rays, nuclear medicine, or CAT scanning.

Ultrasonic cleaners are sometimes mistakenly called supersonic cleaners. They are used at frequencies from 20-40 kHz for jewellery, lenses and other optical parts, watches, dental instruments, surgical instruments and industrial parts. An ultrasonic cleaner works by the energy released from the collapse of millions of tiny (microscopic) 'cavitations's near the dirty surface. The bubbles formed by cavitation collapse forming small jets directed at the surface.

All content from Kiddle encyclopedia articles (including the article images and facts) can be freely used under Attribution-ShareAlike license, unless stated otherwise. Cite this article:
Ultrasound Facts for Kids. Kiddle Encyclopedia.