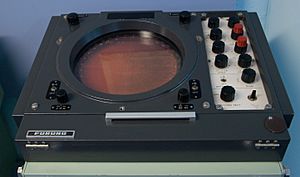 Sonar is a machine that uses underwater sound waves to find other objects in the sea. A sonar can work by sending out sound and listening for echoes (active sonar), like a radar, or by listening for sound made by the object it is trying to find (passive sonar).

The basic parts of an active sonar are:

The first use of passive sonar was in 1490 by Leonardo da Vinci, when he put a tube onto water and listened. Active sonar was first used in 1917 by Paul Langevin. The word SONAR was created during the Second World War as an acronym for Sound Navigation and Ranging. This acronym replaced the British acronym ASDIC. The word is now thought by many people as a regular word, no longer as an acronym.

All content from Kiddle encyclopedia articles (including the article images and facts) can be freely used under Attribution-ShareAlike license, unless stated otherwise. Cite this article:
Sonar Facts for Kids. Kiddle Encyclopedia.