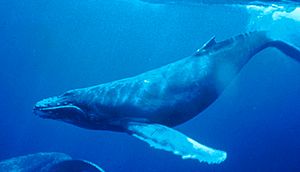 Marine mammals are mammals that depend on the ocean and other marine ecosystems to live. They include animals such as seals, whales, manatees, sea otters and polar bears.

Cetaceans are fully aquatic. Seals and sea-lions are semiaquatic. They spend the most of their time in the water but need to return to land to mate, breed and molt. Some marine mammals eat zooplankton, others eat fish, squid, shellfish, or sea grass, and a few eat other mammals.

All content from Kiddle encyclopedia articles (including the article images and facts) can be freely used under Attribution-ShareAlike license, unless stated otherwise. Cite this article:
Marine mammal Facts for Kids. Kiddle Encyclopedia.