Killer whales, or Orcas (Orcinus orca) are cetaceans. They are the largest dolphins in the world, called 'whales' because of their size. Orcas have mostly black skin with white patches.They are found in all the world's oceans, from the cold of the Arctic to the tropical seas, absent only from the Baltic and Black seas, and some areas of the Arctic Ocean. They are easy to identify because of their distinctive white and black colouring.

Some local populations are considered threatened or endangered due to prey depletion, habitat loss, pollution (by PCBs), capture for marine mammal parks, and conflicts with human fisheries. In late 2005, the southern resident killer whales, which swim in British Columbia and Washington state waters, were placed on the U.S. Endangered Species list.

Wild killer whales are not considered a threat to humans, but there have been cases of captive orcas killing or injuring their handlers at marine theme parks. 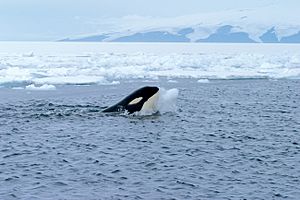 A killer whale plays with a ball of ice, soon after a researcher had thrown a snowball at the whale

Killer whales have the second-heaviest brains among marine mammals. They can be trained in captivity and are often described as intelligent, although defining and measuring "intelligence" is difficult in a species whose life is very different from ours.

Killer whales imitate others, and seem to teach skills to their young. This is most strikingly seen when killer whales deliberately beach themselves to catch seals. Off Península Valdés, adults sometimes pull seals off the shoreline and then release them again near juvenile whales, allowing the younger whales to practice the difficult capture technique on the now-weakened prey. 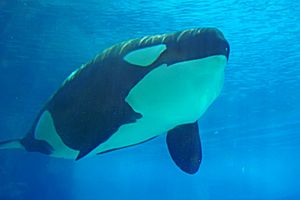 Off the Crozet Islands, mothers push their calves onto the beach, waiting to pull the youngster back if needed.

People who have interacted closely with killer whales tell numerous stories of the whales demonstrating curiosity, playfulness, and ability to solve problems. For example, Alaskan killer whales have not only learned how to steal fish from longlines, but have overcome a variety of techniques designed to stop them.

The killer whale's use of dialects and the passing of other learned behaviours from generation to generation have been described as a form of culture. 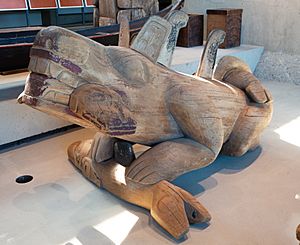 The dorsal fin of the orca can extend up to six feet above its body. That's taller than most grown men. And because a killer whale swims close to the surface, the dorsal fin can often be seen gliding through the surface of the water. This causes some people to mistake killer whale for sharks. 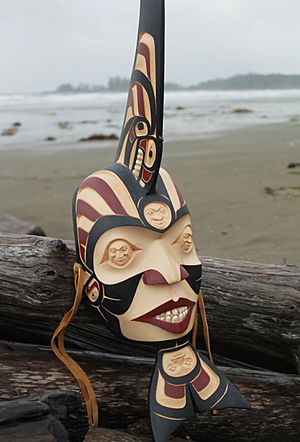 In captivity, dorsal fins often collapse for many reasons, but in the wild, dorsal fin collapse happens in less than one percent of wild orcas.

The killer whale's teeth are very strong, and its jaws exert a powerful grip; the upper teeth fall into the gaps between the lower teeth when the mouth is closed. The firm middle and back teeth hold prey in place, while the front teeth are inclined slightly forward and outward to protect them from powerful jerking movements. Killer whales have good eyesight above and below the water, excellent hearing, and a good sense of touch.

Occasionally a killer whale is white; they have been spotted in the northern Bering Sea and around St. Lawrence Island, and near the Russian coast. In February 2008, a white killer whale was photographed 3.2 km (2.0 mi) off Kanaga Volcano in the Aleutian Islands. 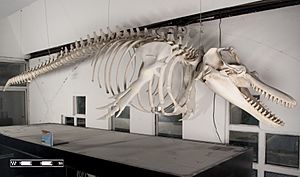 Killer whales are apex predators, meaning that they themselves have no natural predators. They are sometimes called the wolves of the sea, because they hunt in groups like wolf packs. Killer whales hunt varied prey including fish, cephalopods, mammals, sea birds, and sea turtles.

Different populations or ecotypes may specialize, and some can have a dramatic impact on prey species. However, whales in tropical areas appear to have more generalized diets due to lower food productivity. 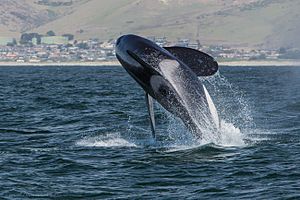 Day-to-day killer whale behaviour generally consists of foraging, travelling, resting and socializing. Killer whales frequently engage in surface behaviour such as breaching (jumping completely out of the water) and tail-slapping. These activities may have a variety of purposes, such as courtship, communication, dislodging parasites, or play. Spyhopping is a behaviour in which a whale holds its head above water to view its surroundings. 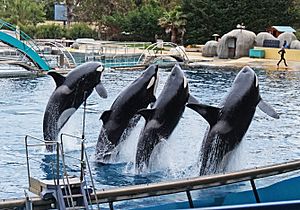 Killer whales are notable for their complex societies. Only elephants and higher primates live in comparably complex social structures. Due to orcas' complex social bonds, many marine experts have concerns about how humane it is to keep them in captivity. 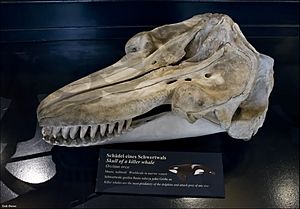 Skull of a Killer Whale

Female killer whales are often tamed and can be trained to do tricks for audiences in marine shows, like in Sea World. Sometimes, killer whales have even starred in movies, such as the movie titled Free Willy. Orcas can be dangerous, and have been known to kill their attendants on rare occasions. Some marine parks now require trainers to stay outside the pool when they work with orcas. Unlike wild killer whales, captive killer whales are reported to have made nearly two dozen attacks on humans since the 1970s, some of which have been fatal. 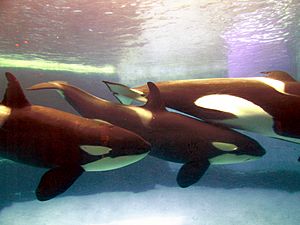 The indigenous peoples of the Pacific Northwest Coast feature killer whales throughout their art, history, spirituality and religion. The Haida regarded killer whales as the most powerful animals in the ocean, and their mythology tells of killer whales living in houses and towns under the sea. For the Kwakwaka'wakw, the killer whale was regarded as the ruler of the undersea world, with sea lions for slaves and dolphins for warriors.

The Tlingit of southeastern Alaska regarded the killer whale as custodian of the sea and a benefactor of humans. The Maritime Archaic people of Newfoundland also had great respect for killer whales, as evidenced by stone carvings found in a 4,000-year-old burial at the Port au Choix Archaeological Site.

The killer whale's intelligence, train-ability, striking appearance, playfulness in captivity and sheer size have made it a popular exhibit at aquaria and aquatic theme parks. From 1976 to 1997, 55 whales were taken from the wild in Iceland, 19 from Japan, and three from Argentina. These figures exclude animals that died during capture. Live captures fell dramatically in the 1990s, and by 1999, about 40% of the 48 animals on display in the world were captive-born.

Organizations such as World Animal Protection and the Whale and Dolphin Conservation campaign against the practice of keeping them in captivity. In captivity, they often develop pathologies, such as the dorsal fin collapse seen in 60–90% of captive males. Captives have vastly reduced life expectancy. Captivity usually bears little resemblance to wild habitat, and captive whales' social groups are foreign to those found in the wild.

Critics claim captive life is stressful due to these factors and the requirement to perform circus tricks that are not part of wild killer whale behavior. Wild killer whales may travel up to 160 kilometres (100 mi) in a day, and critics say the animals are too big and intelligent to be suitable for captivity. 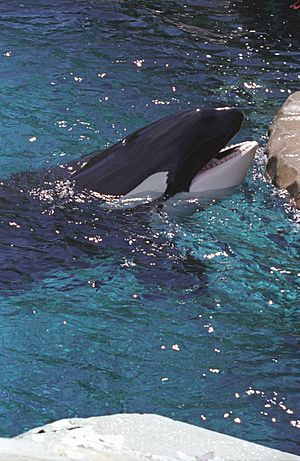 Captives occasionally act aggressively towards themselves, their tank-mates, or humans, which critics say is a result of stress.

Between 1991 and 2010, the bull orca known as Tilikum was involved in the death of three people, and was featured in the critically acclaimed 2013 film, Blackfish. Tilikum lived at SeaWorld from 1992 until his death in 2017.

As of March 2016, SeaWorld has announced that they will be ending their orca breeding program and their theatrical shows. They previously announced, in November 2015, that the shows would be coming to an end in San Diego, but it is now to happen in both Orlando and San Antonio as well.

All content from Kiddle encyclopedia articles (including the article images and facts) can be freely used under Attribution-ShareAlike license, unless stated otherwise. Cite this article:
Killer whale Facts for Kids. Kiddle Encyclopedia.