The megamouth shark is a data deficient species. 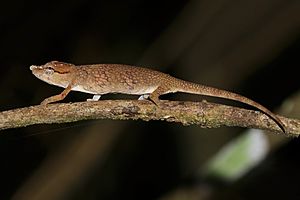 The short-nosed or deceptive chamaeleon (Calumma fallax) is a chameleon endemic to Madagascar. It was first described in 1900 in the Ikongo forest. It is data deficient, the actual population is unknown.

Data deficient is a conservation status. Scientists say a species is data deficient when there is not enough information to figure out how many of them there are and whether they are endangered. Very often, this means, that it is unclear, where the species occurs, or how often it can be found.

All content from Kiddle encyclopedia articles (including the article images and facts) can be freely used under Attribution-ShareAlike license, unless stated otherwise. Cite this article:
Data deficient Facts for Kids. Kiddle Encyclopedia.