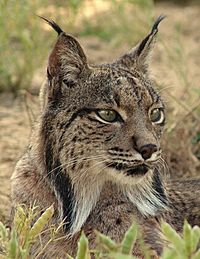 Endangered species as classified by the International Union for Conservation of Nature (IUCN), are species which have been categorized as very likely to become extinct in the near future. On the IUCN Red List, endangered is the second most severe conservation status for wild populations in the IUCN's schema after Critically endangered (CR). In 2012, the IUCN Red List featured 3,079 animal and 2,655 plant species as endangered (EN) worldwide. The figures for 1998 were 1,102 and 1,197 respectively. 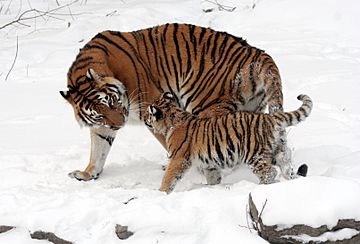 Though labelled a list, the IUCN Red List is a system of assessing the global conservation status of species that includes "Data Deficient" (DD) species – species for which more data and assessment is required before their situation may be determined – as well species comprehensively assessed by the IUCN's species assessment process. Those species of "Near Threatened" (NT) and "Least Concern" (LC) status have been assessed and found to have relatively robust and healthy populations, though these may be in decline. Unlike their more general use elsewhere, the List uses the terms "endangered species" and "threatened species" with particular meanings: "Endangered" (EN) species lie between "Vulnerable" (VU) and "Critically Endangered" (CR) species, while "Threatened" species are those species determined to be Vulnerable, Endangered or Critically Endangered.

Some examples of species classified as endangered by the IUCN are listed below:

All content from Kiddle encyclopedia articles (including the article images and facts) can be freely used under Attribution-ShareAlike license, unless stated otherwise. Cite this article:
Endangered species (IUCN status) Facts for Kids. Kiddle Encyclopedia.