The Asian Elephant (Elephas Maximus) is an elephant species living in Asia. They are more easily tamed than larger African elephants. People have used them as working animals for hundreds of years. 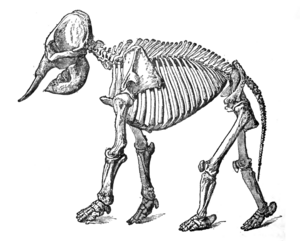 Illustration of an elephant skeleton

In general, the Asian elephant is smaller than the African bush elephant.

The ears are small.

The feet have more nail-like structures than those of African elephants - five on each forefoot, and four on each hind foot. 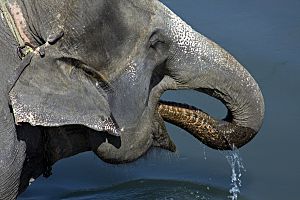 The distinctive trunk is an elongation of the nose and upper lip combined; the nostrils are at its tip, which has a one finger-like process. The trunk contains as many as 60,000 muscles.

The trunk has many uses and is highly sensitive. The acute sense of smell uses both the trunk and Jacobson's organ.

The trunk can hold about four litres of water. Elephants will playfully wrestle with each other using their trunks, but generally use their trunks only for gesturing when fighting. 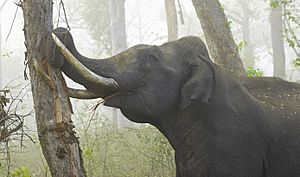 Tusks serve to dig for water, salt, and rocks, to debark and uproot trees, as levers for maneuvering fallen trees and branches, for work, for display, for marking trees, as weapon for offense and defense, as trunk-rests, and as protection for the trunk. Elephants are known to be right or left tusked.

Female Asian elephants usually lack tusks; if tusks - in that case called "tushes" - are present, they are barely visible, and only seen when the mouth is open. 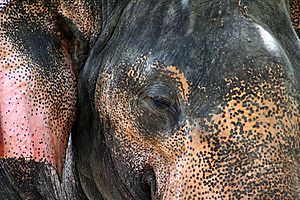 Depigmented skin on the forehead and ears of an Asian elephant

Skin colour is usually grey, and may be masked by soil because of dusting and wallowing.

Their wrinkled skin is movable and is smoother than that of African elephants, and may be depigmented on the trunk, ears, or neck.

The epidermis and dermis of the body average 18 mm (0.71 in) thick; skin on the dorsum is 30 mm (1.2 in) thick providing protection against bites, bumps, and adverse weather. They can tolerate cold better than excessive heat.

Asian elephants are highly intelligent and self-aware. They exhibit a wide variety of behaviours, including those associated with grief, learning, allomothering, mimicry, play, altruism, use of tools, compassion, cooperation, self-awareness, memory, and language.

Elephants are reported to go to safer ground during natural disasters like tsunamis and earthquakes, although there have been no scientific records of this since it is hard to recreate or predict natural disasters. 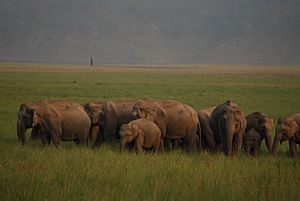 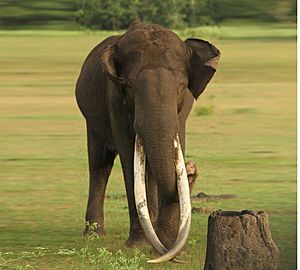 In China, Asian elephants survive only in the prefectures of Xishuangbanna, Simao, and Lincang of southern Yunnan.

In Bangladesh, some isolated populations survive in the south-east Chittagong Hills.

The Borneo elephant occurs in Borneo's northern and northeastern parts. 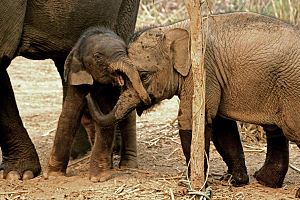 Elephants are crepuscular. They are classified as megaherbivores and consume up to 150 kg (330 lb) of plant matter per day. They are both grazers and browsers, and were recorded to feed on 112 different plant species, most commonly of the order Malvales, and the legume, palm, sedge and true grass families.

They browse more in the dry season with bark constituting a major part of their diet in the cool part of that season.

They drink at least once a day and are never far from a permanent source of fresh water. They need 80–200 litres of water a day and use even more for bathing. At times, they scrape the soil for clay or minerals.

Adult females and calves may move about together as groups, but adult males disperse from their mothers upon reaching adolescence. Bull elephants may be solitary or form temporary 'bachelor groups'.

Social ties generally tend to be weaker than in African elephants.

Elephants are able to distinguish low amplitude sounds. They use infrasound to communicate.

Tiger predation on Asian elephants is rare but is not restricted only to small calves. 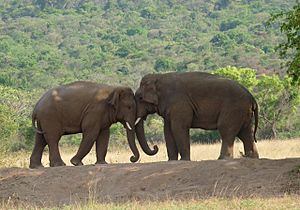 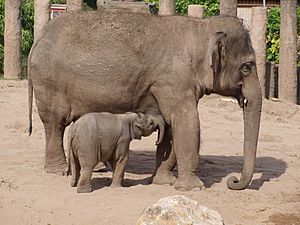 A cow elephant with suckling young at the Chester Zoo

Between the age of 10 and 20 years, bulls undergo an annual phenomenon known as "musth". This is a period where the testosterone level is up to 100 times greater than non-musth periods, and they become aggressive. They fight other bulls for access to the females.

The gestation period is 18–22 months, and the female gives birth to one calf, only occasionally twins. The calf is fully developed by the 19th month, but stays in the womb to grow so that it can reach its mother to feed. At birth, the calf weighs about 100 kg (220 lb), and is suckled for up to three years.

Once a female gives birth, she usually does not breed again until the first calf is weaned, resulting in a four to five year birth interval.

Females stay on with the herd, but mature males are chased away.

Asiatic elephants reach adulthood at 17 years of age in both sexes.

Elephants' life expectancy has been exaggerated in the past. They live on average for 60 years in the wild and 80 in captivity. 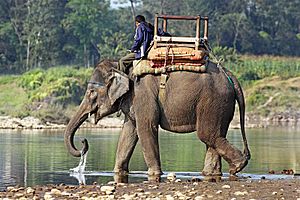 Elephants are used for safari tourism throughout Asia 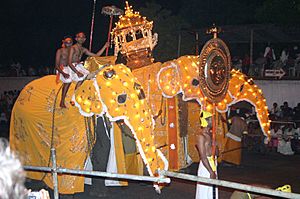 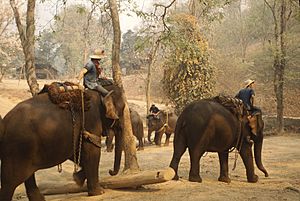 At this elephant training camp, captive elephants are taught to handle logs.

At most seasons of the year, Asian elephants are timid and much more ready to flee from a foe than to attack. However, solitary rogues are frequently an exception to this rule, and sometimes make unprovoked attacks on passers-by. Rogue elephants sometimes take up a position near a road, making it impassable to travelers.

Females with calves are at all times dangerous to approach. When an Asian elephant makes a charge, it tightly curls up its trunk and attacks by trampling its victim with feet or knees, or, if a male, by pinning it to the ground with its tusks. During musth, bulls are highly dangerous, not only to human beings, but also to other animals. At the first indications, trained elephants are secured tightly to prevent any mishaps.

The first historical record of the domestication of Asian elephants was in Harappan times. Ultimately, the elephant went on to become a siege engine, a mount in war, a status symbol, a beast of burden, and an elevated platform for hunting during historical times in South Asia.

Elephants have been captured from the wild and tamed for use by humans. Their ability to work under instruction makes them particularly useful for carrying heavy objects.

They have been used particularly for timber-carrying in jungle areas. Other than their work use, they have been used in war, in ceremonies, and for carriage. They have been used for their ability to travel over difficult terrain by hunters, for whom they served as mobile hunting platforms. The same purpose is met in safaris in modern times.

The biggest threat to Asian elephants today is loss of habitat, leading in turn to increasing conflicts between humans and elephants. They are poached for ivory and a variety of other products including meat and leather.

All content from Kiddle encyclopedia articles (including the article images and facts) can be freely used under Attribution-ShareAlike license, unless stated otherwise. Cite this article:
Asian elephant Facts for Kids. Kiddle Encyclopedia.