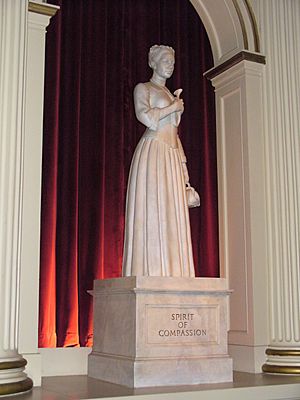 Compassion personified: a statue at the Epcot center in Florida

Compassion is the response to the suffering of others that motivates a desire to help them.

Compassion motivates people to go out of their way to help the physical, spiritual, or emotional hurts and pains of another. Compassion is often regarded as having an emotional aspect to it, though when based on cerebral notions such as fairness, justice and interdependence, it may be considered rational in nature and its application understood as an activity based on sound judgment. There is also an aspect of compassion which regards a quantitative dimension, such that individual's compassion is often given a property of "depth", "vigour", or "passion." The etymology of "compassion" is Latin, meaning "co-suffering." More involved than simple empathy, compassion commonly gives rise to an active desire to alleviate another's suffering.

Compassion is often, though not inevitably, the key component in what manifests in the social context as altruism. In ethical terms, the expressions down the ages of the so-called Golden Rule often embodies by implication the principle of compassion: Do to others what you would have them do to you.

The English noun compassion, meaning to love together with, comes from Latin. Its prefix com- comes directly from com, an archaic version of the Latin preposition and affix cum (= with); the -passion segment is derived from passus, past participle of the deponent verb patior, patī, passus sum. Compassion is thus related in origin, form and meaning to the English noun patient (= one who suffers), from patiens, present participle of the same patior, and is akin to the Greek verb πάσχειν (= paskhein, to suffer) and to its cognate noun πάθος (= pathos). Ranked a great virtue in numerous philosophies, compassion is considered in almost all the major religious traditions as among the greatest of virtues. 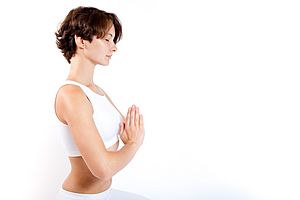 Yoga aims at physical, mental and spiritual purification, with a compassionate mind and spirit being one of its most important goals

Identifying with another person is an essential process for human beings. It is commonly seen throughout the world as people adapt and change with new styles of clothing, language, behavior, etc., which is illustrated by infants who begin to mirror the facial expressions and body movements of their mother as early as the first days of their lives. This process is highly related to compassion because sympathizing with others is possible with people from other countries, cultures, locations, etc. A possible source of this process of identifying with others comes from a universal category called "Spirit." Toward the late 1970s, very different cultures and nations around the world took a turn to religious fundamentalism, which has occasionally been attributed to "Spirit." The more one person knows about the human condition and the associated experiences is another route to identification. 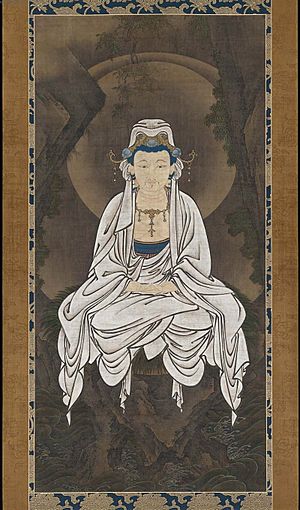 Kannon, incarnation of the Bodhisattva of Compassion, 16th century image from Japan

The importance of identifying with others for compassion is contrasted by the negative physical and psychological effects of abandonment. Compassion seems to be characteristic of democratic societies. The role of compassion as a factor contributing to individual or societal behavior has been the topic of continuous debate. In contrast to the process of identifying with other people, a complete absence of compassion may require ignoring or disapproving identification with other people or groups. This concept has been illustrated throughout history: The Holocaust, Genocide, European colonization of the Americas, etc. The seemingly essential step in these atrocities could be the defining of the victims as "not human" or "not us." The atrocities committed throughout human history have only been relieved through the presence of compassion.

Suffering has been defined as the perception of a person's impending destruction or loss of integrity, which continues until the threat is vanished or the person's integrity can be restored. Personality psychology agrees that people are inherently different and distinct from one another, which should lead to the conclusion that human suffering is always individual and unique. Suffering can result from psychological, social, and physical trauma. It appears to happen in acute forms as often as chronically. There is an inherent difficulty in knowing that someone else is suffering because of its lonely nature, which leads to the conclusion that many people may not know they are suffering. They may instead point to their external circumstances with the early stages of suffering being quiet or not discussed. The later stages may involve the person expressing their victimization and searching for help. Compassion is recognized through identifying with other people, the knowledge of human behavior, the perception of suffering, transfer of feelings, knowledge of goal and purpose changes in sufferers, and the absence of the sufferer from a group.

Earlier studies established the links between interpersonal violence and animal cruelty. Compassion may have the ability to induce feelings of kindness and forgiveness, which could give people the ability to stop situations that occasionally lead to violence.

Scientists examine the motivated regulation of compassion in the context of large-scale crises, such as natural disasters and genocides. Much research has established that people tend to feel more compassion for single identifiable victims than large masses of victims (the Identifiable victim effect). Yet they have found that this collapse of compassion depends on having the motivation and ability to regulate emotions. People only show less compassion for many victims than for single victims of disasters when they expect to incur a financial cost upon helping, and only when they can skillfully regulate their emotions. In ongoing research, psychologists are exploring how concerns about becoming emotionally exhausted may motivate people to curb their compassion for—and dehumanize—members of stigmatized social groups, such as homeless individuals and drug addicts.

Compassion consists of three major requirements: People must feel that troubles that evoke their feelings are serious, people require that sufferers' troubles are not self-inflicted, and that people must be able to picture themselves with the same problems. 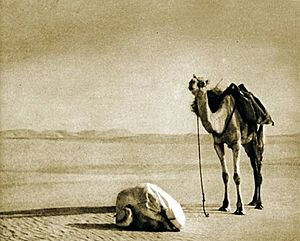 A 1930s photograph of a desert traveler seeking the assistance of Allah the Merciful, the Compassionate

In a 2009 small fMRI experiment, Mary Helen Immordino-Yang and colleagues at the Brain and Creativity Institute studied strong feelings of compassion for social and physical pain in others. Both feelings involved an expected change in activity in the anterior insula, anterior cingulate, hypothalamus, and midbrain, but they also found a previously undescribed pattern of cortical activity on the posterior medial surface of each brain hemisphere, a region involved in the default mode of brain function, and implicated in self-related processes.

In one study conducted by Jill Rilling and Gregory Berns, neuroscientists at Emory University, subjects’ brain activity was recorded while they helped someone in need. It was found that while the subjects were performing compassionate acts the caudate nucleus and anterior cingulate regions of the brain were activated, the same areas of the brain associated with pleasure and reward. This research sheds light on how acting on compassion induces a positive feeling in people and how humans are innately wired to want to help the suffering.

Compassion is one of the most important attributes for physicians practicing medical services. It has been suggested that felt compassion brings about the desire to do something to help the sufferer. That desire to be helpful is not compassion, but it does suggest that compassion is similar to other emotions by motivating behaviors to reduce the tension brought on by the emotion. Physicians generally identify their central duties as the responsibility to put the patient's interests first, including the duty not to harm, deliver proper care, and maintain confidentiality. Compassion is seen in each of those duties because of its direct relation to the recognition and treatment of suffering. Physicians who use compassion understand the effects of sickness and suffering on human behavior. Compassion may be closely related to love and the emotions evoked in both. This is illustrated by the relationship between patients and physicians in medical institutions. The relationship between suffering patients and their care-givers provides evidence that compassion is a social emotion, which is highly related to closeness between individuals.

According to Figley, individuals with a higher capacity or responsibility to empathize with others may be at risk for "compassion fatigue" or stress, which is related to professionals and individuals who spend a significant amount of time responding to information related to suffering. However, newer research by Singer and Ricard suggests that it is empathy which gets fatigued and not compassion. Recent research suggests that compassion could even prevent fatigue and burnout.

All content from Kiddle encyclopedia articles (including the article images and facts) can be freely used under Attribution-ShareAlike license, unless stated otherwise. Cite this article:
Compassion Facts for Kids. Kiddle Encyclopedia.