Empathy is a word that means that someone is able to share or understand the emotions and feelings of another person. Someone may need to have a certain amount of empathy before they are able to feel compassion. The word was coined in 1909 by the English psychologist Edward.B. Titchener. 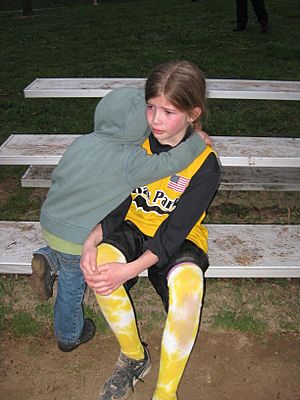 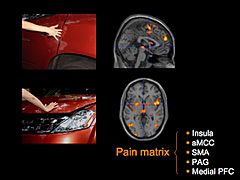 When children are shown videoclips with situations where they see people suffering pain by coincidence, neural circuits related to pain are being activated in their brain.

Empathy is an ability with many different definitions. They cover a wide spectrum, ranging from caring for other people and having a desire to help them, to experiencing emotions that match another person's emotions, to knowing what the other person is thinking or feeling, to blurring the line between self and other. Below are definitions of empathy:

All content from Kiddle encyclopedia articles (including the article images and facts) can be freely used under Attribution-ShareAlike license, unless stated otherwise. Cite this article:
Empathy Facts for Kids. Kiddle Encyclopedia.