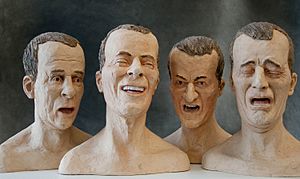 Facial expressions can communicate sympathy and other emotions nonverbally.

Sympathy exists when the feelings or emotions of one person lead to similar feelings in another person so that they share feeling. Mostly sympathy means the sharing of unhappiness or suffering, but it can also mean sharing other (positive) emotions. In a broader sense, it can refer to the sharing of political or ideological sentiments, such as in the phrase "a communist sympathiser".

The psychological state of sympathy is closely linked with that of empathy, but is not identical to it. Empathy is understanding and feeling another person's emotions as they feel them, but makes no statement as to how they are viewed.

Sympathy, by contrast, implies a degree of equal feeling, that is, the sympathiser views the matter similarly to how the person themselves does. It thus implies concern, or care or a wish to reduce negative feelings others are experiencing.

All content from Kiddle encyclopedia articles (including the article images and facts) can be freely used under Attribution-ShareAlike license, unless stated otherwise. Cite this article:
Sympathy Facts for Kids. Kiddle Encyclopedia.