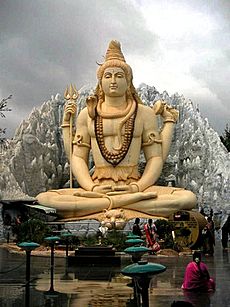 Statue of Shiva doing Yogic meditation. The statue is in Bangalore, India.

Yoga is an old discipline from India. It is both spiritual and physical. Yoga uses breathing techniques, exercise and meditation. It helps to improve health and happiness. Yoga is the Sanskrit word for union. Patanjali was a pioneer of classical yoga. He defined yoga as "the cessation of the modification of the mind" (stopping changing the mind).

A person doing yoga will move from one posture (called asana) to another. For example, the "sun-salutation" contains 12 poses of asanas, one after the other, and is said to help balance body and soul. There is a specific mantra for each asana. The "sun-salutation" is popularly known as "Suryanamaskar".

Yoga was introduced by Indian Ascetic. Ascetic practices (tapas) are referenced in the Brāhmaṇas (900 to 500 BC), early commentaries on the Vedas. Several seals discovered at Indus Valley Civilization (~3300–1700 B.C.) sites in Pakistan depict figures in positions resembling a common yoga or meditation pose. The pose shows "a form of ritual discipline, suggesting a precursor of yoga", according to archaeologist Gregory Possehl. Scholars think there must be some type of connection between the Indus Valley seals and later yoga and meditation practices, though there is no conclusive evidence. 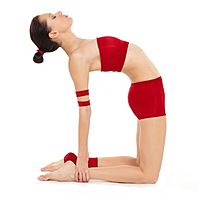 A yogasana is a pose in which a person can sit. The intention of yogasana is to exercise the body and make it free of pains and problems.

Yogi is a person who has mastered yoga or has achieved great success in yoga. Yogasanas are also called Asana or Asanas (plural). A Yogi can sit in any asana for a given time.

This yogasana helps to release gas in the stomach.

All content from Kiddle encyclopedia articles (including the article images and facts) can be freely used under Attribution-ShareAlike license, unless stated otherwise. Cite this article:
Yoga Facts for Kids. Kiddle Encyclopedia.