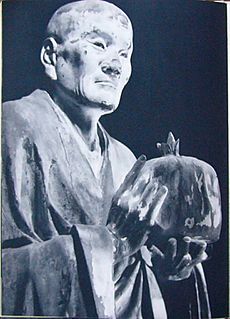 Asaṅga (Tibetan: ཐོགས་མེད།, Wylie: thogs med, traditional Chinese: 無著; ; pinyin: Wúzhuó; Romaji: Mujaku) (fl. 4th century C.E.) was "one of the most important spiritual figures" of Mahayana Buddhism and the "founder of the Yogachara school". He is known as one of the seventeen Nalanda masters and taught at the monastery which is located in modern-day Bihar. Traditionally, he and his half-brother Vasubandhu are regarded as the major classical Indian Sanskrit exponents of Mahayana Abhidharma, Vijñanavada (awareness only) thought and Mahayana teachings on the bodhisattva path. 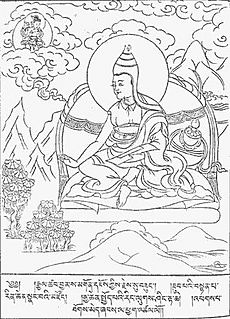 Tibetan depiction of Asaṅga and Maitreya

According to later hagiographies, Asaṅga was born as the son of a high caste father in Puruṣapura (present day Peshawar in Pakistan), which at that time was part of the ancient kingdom of Gandhāra. Current scholarship places him in the fourth century CE. He was perhaps originally a member of the Mahīśāsaka school or the Mūlasarvāstivāda school but later converted to Mahāyāna. According to some scholars, Asaṅga's frameworks for abhidharma writings retained many underlying Mahīśāsaka traits, but other scholars argue that there is insufficient data to determine which school he originally belonged to.

In the record of his journeys through the kingdoms of India, Xuanzang wrote that Asaṅga was initially a Mahīśāsaka monk, but soon turned toward the Mahāyāna teachings. Asaṅga had a half-brother, Vasubandhu, who was a monk from the Sarvāstivāda school. Vasubandhu is said to have taken up Mahāyāna Buddhism after meeting with Asaṅga and one of Asaṅga's disciples.

Asaṅga spent many years in serious meditation and study under various teachers but the narrative of the 6th century monk Paramārtha states that he was unsatisfied with his understanding. Paramārtha then recounts how he used his meditative powers (siddhis) to travel to Tuṣita Heaven to receive teachings from Maitreya Bodhisattva on emptiness, and how he continued to travel to receive teachings from Maitreya on the Mahayana sutras.

Xuanzang (fl. c. 602 – 664), a Chinese monk who traveled to India to study in the Yogacara tradition tells a similar account of these events:

In the great mango grove five or six li to the southwest of the city (Ayodhya), there is an old monastery where Asaṅga Bodhisattva received instructions and guided the common people. At night he went up to the place of Maitreya Bodhisattva in Tuṣita Heaven to learn the Yogācārabhūmi-śāstra, the Mahāyāna-sūtra-alaṃkāra-śāstra, the Madhyānta-vibhāga-śāstra, etc.; in the daytime, he lectured on the marvelous principles to a great audience.

Modern scholars disagree on whether the figure of Maitreya in this story is to be considered as Asaṅga's human teacher or as a visionary experience in meditation. Scholars such as Frauwallner held that this figure, sometimes termed Maitreya-nātha, was an actual historical person and teacher. Other scholars argue that this figure was the tutelary deity of Asaṅga (Iṣṭa-devatā) as well as numerous other Yogacara masters, a point noted by the 6th century Indian monk Sthiramati. Whatever the case, Asaṅga's experiences led him to travel around India and propagate the Mahayana teachings. According to Taranatha's History of Buddhism in India, he founded 25 Mahayana monasteries in India.

Asaṅga went on to write some key treatises (shastras) of the Yogācāra school. Over time, many different works were attributed to him (or to Maitreya, with Asaṅga as transmitter), although there are discrepancies between the Chinese and Tibetan traditions concerning which works are attributed to him. Modern scholars have also problematized and questioned these attributions after critical textual study of the sources. The many works attributed to this figure can be divided into the three following groups.

The first are three works which are widely agreed by ancient and modern scholars to be by Asaṅga:

The next group of texts are those that Tibetan hagiographies state were taught to Asaṅga by Maitreya and are thus known as the "Five Dharmas of Maitreya" in Tibetan Buddhist scholasticism. According to D.S. Ruegg, the "five works of Maitreya" are mentioned in Sanskrit sources from only the 11th century onwards. As noted by S.K. Hookham, their attribution to a single author has been questioned by modern scholars. The traditional list is:

According to Karl Brunnholzl, the Chinese tradition also speaks of five Maitreya texts (first mentioned in Dunlun's Yujia lunji), "but considers them as consisting of the Yogācārabhūmi, *Yogavibhāga [now lost], Mahāyānasūtrālamkārakā, Madhyāntavibhāga and the Vajracchedikākāvyākhyā."

While the Yogācārabhūmi śāstra (“Treatise on the Levels of Spiritual Practitioners”), a massive and encyclopaedic work on yogic praxis, has traditionally been attributed to Asaṅga or Maitreya in toto, but most modern scholars now consider the text to be a compilation of various works by numerous authors, and different textual strata can be discerned within its contents. However, Asaṅga may still have participated in the compilation of this work.

The third group of texts associated with Asaṅga comprises two commentaries: the Kārikāsaptati, a work on the Vajracchedikā, and the Āryasaṃdhinirmocana-bhāṣya (Commentary on the Saṃdhinirmocana). The attribution of both of these to Asaṅga is not widely accepted by modern scholars.

All content from Kiddle encyclopedia articles (including the article images and facts) can be freely used under Attribution-ShareAlike license, unless stated otherwise. Cite this article:
Asanga Facts for Kids. Kiddle Encyclopedia.