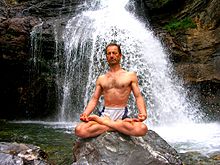 The lotus, a common asana position

Asana is a body position in Yoga. It can mean where a person sits, and the way that they sit. It helps to balance the mind and body. It is meant to be firm, yet comfortable.

All the many different body positions in Yoga are Asanas: they all have their own names and every name ends with asana, such as savasana (correct lying). Many have names of animals, such as bujangasana (cobra). Others have names that describe the position, such as shirshasana (head).

All content from Kiddle encyclopedia articles (including the article images and facts) can be freely used under Attribution-ShareAlike license, unless stated otherwise. Cite this article:
Asana Facts for Kids. Kiddle Encyclopedia.