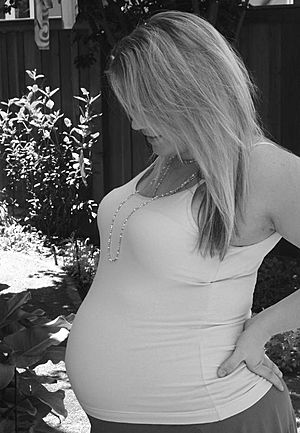 Pregnancy is when a female mammal has an unborn baby inside her. During pregnancy, a female is called "pregnant". A human pregnancy is about 38 weeks long, from conception to childbirth. Usually the mother has one baby at a time. Sometimes the mother has two babies at one time. Two babies are called twins. The mother can have three or more babies at one time. This does not happen very often.

Growth of the baby

When the woman's egg and the man's seed come together, it makes one cell called a zygote. The zygote grows into an embryo, which grows into a fetus. When the fetus is ready, the baby is born.

All content from Kiddle encyclopedia articles (including the article images and facts) can be freely used under Attribution-ShareAlike license, unless stated otherwise. Cite this article:
Pregnancy Facts for Kids. Kiddle Encyclopedia.