The capital and largest city is Skopje, with more than 500,000 residents. It has many smaller cities. Some important ones are Bitola, Prilep, Tetovo, Kumanovo, Ohrid, Veles, Stip, and Strumica.

North Macedonia is often called a land of lakes and mountains. There are more than 50 large lakes and sixteen mountains higher than 2000 meters above sea level.

North Macedonia is a member of the United Nations and World Trade Organization (WTO). It joined NATO on 27 March 2020. Since December 2005, it is a candidate for joining the European Union.

The language spoken by the majority of the population is Macedonian. Albanian is also spoken by the Albanian minority (25%) living in the country. North Macedonia has two official languages, Macedonian and Albanian (since 2019).

Historically North Macedonia was part of the ancient Macedonian empire during Alexander the Great’s reign.

What is now North Macedonia used to be a state called Socialist Republic of Macedonia in the southeastern part of the country of Yugoslavia. When that country broke up in 1991, North Macedonia became independent.

In past centuries the territory which today is the Republic of North Macedonia was ruled by many different states and empires.

On 17 June 2018, North Macedonia and Greece agreed to the Prespa agreement which would see the country change its name to the Republic of North Macedonia. The government started completing the constitutional change needed to change the country's name, which was completed on 12 February 2019. 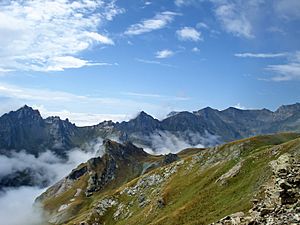 North Macedonia is a landlocked country that is geographically clearly defined by a central valley formed by the Vardar river and framed along its borders by mountain ranges. The terrain is mostly rugged, located between the Šar Mountains and Osogovo, which frame the valley of the Vardar river. Three large lakes – Lake Ohrid, Lake Prespa and Dojran Lake – lie on the southern borders, bisected by the frontiers with Albania and Greece. Ohrid is considered to be one of the oldest lakes and biotopes in the world. The region is seismically active and has been the site of destructive earthquakes in the past, most recently in 1963 when Skopje was heavily damaged by a major earthquake, killing over 1,000.

North Macedonia also has scenic mountains. They belong to two different mountain ranges: the first is the Šar Mountains that continues to the West Vardar/Pelagonia group of mountains (Baba Mountain, Nidže, Kozuf and Jakupica), also known as the Dinaric range. The second range is the Osogovo–Belasica mountain chain, also known as the Rhodope range. The mountains belonging to the Šar Mountains and the West Vardar/Pelagonia range are younger and higher than the older mountains of the Osogovo-Belasica mountain group. Mount Korab of the Šar Mountains on the Albanian border, at 2,764 m (9,068 ft), is the tallest mountain in North Macedonia. 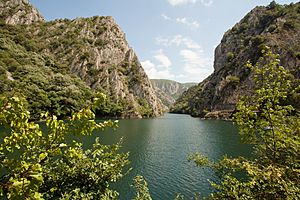 In North Macedonia there are 1,100 large sources of water. The rivers flow into three different basins: the Aegean, the Adriatic and the Black Sea.

The Aegean basin is the largest. It covers 87% of the territory of North Macedonia, which is 22,075 square kilometres (8,523 sq mi). Vardar, the largest river in this basin, drains 80% of the territory or 20,459 square kilometres (7,899 sq mi). Its valley plays an important part in the economy and the communication system of the country. The Vardar Valley project is considered to be crucial for the strategic development of the country.

The Black Sea basin is the smallest with only 37 km2 (14 sq mi). It covers the northern side of Mount Skopska Crna Gora. This is the source of the river Binachka Morava, which joins the Morava, and later, the Danube, which flows into the Black Sea.

North Macedonia has a transitional climate from Mediterranean to continental. The summers are hot and dry, and the winters are moderately cold. Average annual precipitation varies from 1,700 mm (66.9 in) in the western mountainous area to 500 mm (19.7 in) in the eastern area. There are three main climatic zones in the country: temperate Mediterranean, mountainous, and mildly continental. Along the valleys of the Vardar and Strumica rivers, in the regions of Gevgelija, Valandovo, Dojran, Strumica, and Radoviš, the climate is temperate Mediterranean. The warmest regions are Demir Kapija and Gevgelija, where the temperature in July and August frequently exceeds 40 °C (104 °F). The mountainous climate is present in the mountainous regions of the country, and it is characterised by long and snowy winters and short and cold summers. The spring is colder than the fall. The majority of North Macedonia has a moderate continental climate with warm and dry summers and relatively cold and wet winters. There are thirty main and regular weather stations in the country. 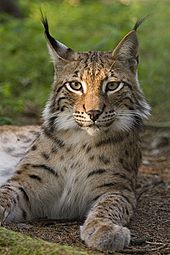 The Eurasian lynx and the Šarplaninec

The flora of North Macedonia is represented by around 210 families, 920 genera, and around 3,700 plant species. The most abundant group are the flowering plants with around 3,200 species, followed by mosses (350 species) and ferns (42).

Phytogeographically, North Macedonia belongs to the Illyrian province of the Circumboreal Region within the Boreal Kingdom. According to the World Wide Fund for Nature (WWF) and the Digital Map of European Ecological Regions by the European Environment Agency, the territory of the Republic can be subdivided into four ecoregions: the Pindus Mountains mixed forests, Balkan mixed forests, Rhodopes mixed forests and Aegean sclerophyllous and mixed forests. 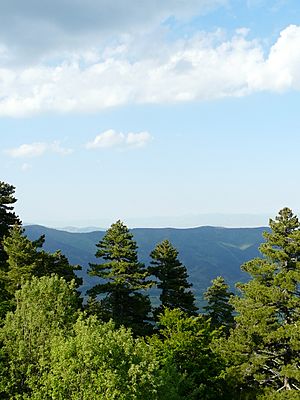 Pinus peuce, the Macedonian Pine or Molika, one of North Macedonia's most recognisable trees

North Macedonia's limited forest growth also includes Macedonian Oaks, the sycamore, weeping willows, white willows, alders, poplars, elms, and the common ash. Near the rich pastures on Šar Mountain and Bistra, Mavrovo, is another plant species characteristic of plant life in Macedonia – the poppy. The quality of thick poppy juice is measured worldwide by morphine units; while Chinese opium contains eight such units and is considered to be of high quality, Indian opium contains seven units, and Turkish opium only six, Macedonian opium contains a full 14 morphine units and is one of the best quality opiums in the world.

The native forest fauna is abundant and includes bears, wild boars, wolves, foxes, squirrels, chamois and deer. The lynx is found, very rarely, in the mountains of western Macedonia, while deer can be found in the region of Demir Kapija. Forest birds include the blackcap, the grouse, the black grouse, the imperial eagle and the forest owl.

The three artificial lakes of the country represent a separate fauna zone, an indication of long-lasting territorial and temporal isolation. The fauna of Lake Ohrid is a relict of an earlier era and the lake is widely known for its letnica trout, lake whitefish, gudgeon, roach, podust, and pior, as well as for certain species of snails of a genus older than 30 million years; similar species can be found only in Lake Baikal. Lake Ohrid is also noted in zoology texts for the European eel and its baffling reproductive cycle: it comes to Lake Ohrid from the distant Sargasso Sea, thousands of kilometres away, and lurks in the depths of the lake for 10 years. When sexually mature, the eel is driven by unexplained instincts in the autumn to set off back to its point of birth. There it spawns and dies, leaving its offspring to seek out Lake Ohrid to begin the cycle anew.

The shepherd dog of Šar Mountain, the Šarplaninec (Yugoslav shepherd), is known worldwide. It stands some 60 centimetres (2.0 ft) tall and is a brave and fierce fighter that may be called upon to fight bears or wolf packs while guarding and defending flocks. The Šarplaninec originates from the shepherd's dog of the ancient Epirotes, the molossus, but it was recognised as its own breed in 1939 under the name of Illyrian shepherd and since 1956 has been known as Šarplaninec.

The country has three national parks:

Republic of Macedonia is a democratic country with a parliament.

All content from Kiddle encyclopedia articles (including the article images and facts) can be freely used under Attribution-ShareAlike license, unless stated otherwise. Cite this article:
North Macedonia Facts for Kids. Kiddle Encyclopedia.