Romani or Romany (native name: romani ćhib) is the language of the Roma and Sinti. The Indo-Aryan Romani language should not be confused with either Romanian (spoken by Romanians), or Romansh (spoken in parts of southeastern Switzerland), both of which are Romance languages.

Analysis of the Romani language has shown that it is closely related to those spoken in central and northern India, Pothwari in particular. This linguistic relationship is believed to indicate the Roma's and Sinti's geographical origin. Loanwords in Romani make it possible to trace the pattern of their migration westwards. 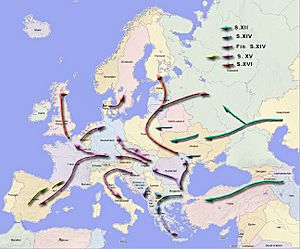 Map showing the migrations of Romani people through Europe and Asia minor.

All content from Kiddle encyclopedia articles (including the article images and facts) can be freely used under Attribution-ShareAlike license, unless stated otherwise. Cite this article:
Romani language Facts for Kids. Kiddle Encyclopedia.