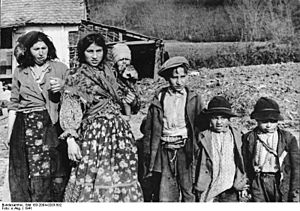 Sinti or Sinta (Singular masc.=Sinto; sing. fem.=Sintisa) is the name of some communities of the nomadic people usually called "Gypsies" in English. This includes communities known in German and Dutch as Zigeuner and in Italian as Zingari. They are closely related to, and are usually considered to be a subgroup of, the Roma people.

While the Sinti were, until quite recently, chiefly nomadic, today only a small percentage of the group remains unsettled. In earlier times, they frequently lived on the outskirts of communities, generally in squalor.

The Sinti arrived in Germany and Austria in the Middle Ages, eventually splitting into two groups: Eftavagarja ("the Seven Caravans") and Estraxarja ("from Austria"). These two groups then expanded, the Eftavagarja into France, where they assimilated into the local Romani groups (Manouches), and the Estraxarja into Italy and Eastern Europe, mainly what are now Croatia, Hungary, Transylvania, the Czech Republic and Slovakia, eventually taking various regional names.

All content from Kiddle encyclopedia articles (including the article images and facts) can be freely used under Attribution-ShareAlike license, unless stated otherwise. Cite this article:
Sinti Facts for Kids. Kiddle Encyclopedia.