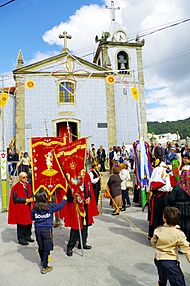 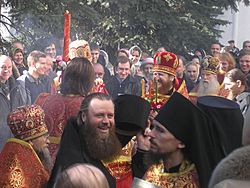 In the Eastern Orthodox Church and Byzantine Rite Catholic Churches, this day is called "Bright Monday" or "Renewal Monday". The services, as in the rest of Bright Week, are quite different from during the rest of the year and are similar to the services on Pascha (Easter Sunday) and include an outdoor procession after the Divine Liturgy; while this is prescribed for all days of that week, often they are only celebrated on Monday and maybe a couple of other days in parish churches, especially in non-Orthodox countries. Also, when the calendar date of the feast day of a major saint, e.g., St. George or the patron saint of a church or one's name day, falls during Holy Week or on Easter Sunday, the saint's day is celebrated on Easter Monday.

Formerly, the post-Easter festivities involved a week of secular celebration, but in many places this was reduced to one day in the 19th century. Events include egg rolling competitions and, in predominantly Roman Catholic countries, dousing other people with water which traditionally had been blessed with holy water the day before at Easter Sunday Mass and carried home to bless the house and food.

In Australia, Easter Monday is a public holiday. People enjoy outdoor sporting events, such as the Oakbank Easter Racing Carnival in South Australia, Australian Three Peaks Race in Tasmania and the Stawell Gift in Victoria.

In Egypt, the ancient festival of Sham El Nessim (Arabic: شم النسيم‎code: ar is deprecated , literally meaning "smelling of the breeze") is celebrated on the Coptic (i.e. Eastern) Easter Monday, though the festival dates back to Pharonic times (about 2700 BC). It is celebrated by both Egyptian Christians and Muslims as an Egyptian national holiday rather than as a religious one. Traditional activities include painting eggs, taking meals outdoors, and eating feseekh (fermented mullet).

In the Republic of Ireland it is a day of remembrance for the men and women who died in the Easter Rising which began on Easter Monday 1916. Until 1966, there was a parade of veterans, past the headquarters of the Irish Republican Army at the General Post Office (GPO) on O'Connell Street, and a reading of the Proclamation of the Irish Republic. 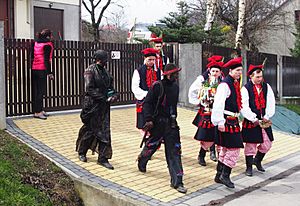 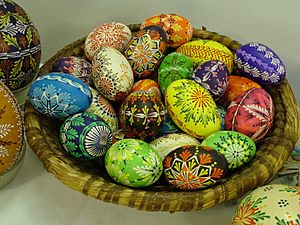 Easter eggs from the Czech Republic

Śmigus-dyngus (or Lany Poniedziałek, the Polish for Wet Monday) is the name for Easter Monday in Poland and the diaspora. In the Czech Republic it is called velikonoční pondělí. In Slovakia veľkonočný pondelok, also called Šibačka/Polievačka or Oblievačka. In Hungary húsvéthétfő. All countries practice a unique custom on this day. In Poland, Hungary, Slovakia, and the Czech Republic traditionally, early in the morning boys awake girls by pouring a bucket of water on their head and striking them about the legs with long thin twigs or switches made from willow, birch or decorated tree branches. Another related custom, unique to Poland, is that of sprinkling bowls (garce) of ashes on people (starts men on women) or houses, celebrated a few weeks earlier at the "półpoście". This custom is almost forgotten, but still practiced in the area around the borders of Mazuria and Masovia.

In Germany, people go out into the fields early in the morning and hold Easter egg races. For Roman Catholics, Easter Monday is also a Holy Day of Obligation in Germany. 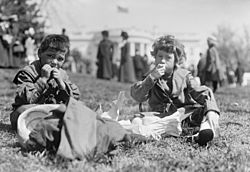 In the United States, Easter Monday is not a federal holiday, and is not largely observed. Even so, the day remains informally observed in some areas such as the state of North Dakota, and some cities in New York, Michigan, and Indiana. Easter Monday was a public holiday in North Carolina from 1935 to 1987. Texas and Maryland schools often have two holidays on Good Friday and Easter Monday. In some states and districts, public schools and universities are closed on Easter Monday, often part of spring break.

Traditionally Polish areas of the country such as Chicago, and more recently Cleveland, observe Easter Monday as Dyngus Day. Dyngus Day celebrations are widespread and popular in Buffalo, New York; Wyandotte and Hamtramck in Michigan; South Bend and La Porte in Indiana; and Hanover, New Hampshire. Another important custom is the White House Easter egg roll.

The world's largest organized Dyngus Day celebration occurs in Buffalo, New York. In Buffalo's eastern suburbs and the city's Historic Polonia District, Dyngus Day is celebrated with a high level of enthusiasm. Although Dyngus Day was celebrated in traditional Polish neighborhoods of Buffalo dating back to the 1870s, modern Dyngus Day in Buffalo had its start with the Chopin Singing Society. Judge Ann T. Mikoll and her late husband Theodore V. Mikoll held the first party at the Society's clubrooms in the Buffalo Central Terminal. The Society left the East Side in the 1980s and moved to new clubrooms in nearby Cheektowaga, where the festival attracted a new generation of revelers. In recent years, the focus of Buffalo's Dyngus Day celebration has returned to the Historic Polonia District in the form of large parties at the Buffalo Central Terminal, St. Stanislaus - Bishop & Martyr Church, the Adam Mickiewicz Library and Dramatic Circle, and at many family-owned Polish taverns. The World's First Dingus Day Parade, inaugurated in 2006, makes its way through the Polonia District from the Broadway Market to Buffalo Central Terminal. In 2008, the parade attracted more than 25,000 people. In 2012, it was reported that more than 50,000 revelers attended Dyngus Day events. Local comedian "Airborne" Eddy Dobosiewicz has been a leading figure in Dyngus Day celebrations in Buffalo for several years.

In 2006, two-time Grammy Award nominated Polka band Jerry Darlak & the Touch recorded the "Everybody's Polish on Dyngus Day" polka. "The polka is meant to capture the uniqueness of the Buffalo Dingus Day celebration," explained the song's composer, Ray Barsukiewicz. Lyrics include references to pussy willows, the sprinkling of water, polka dancing and parties that last until daylight. That same year, Lenny Gomulka and the Chicago Push released the "Dingus Day in Buffalo Polka" to recognize Buffalo's time-honored traditions. Gomulka is regarded as one of the nation's premiere polka stars, having been nominated for 11 Grammy Awards.

In 2007, the world's oldest working fireboat, the Edward M. Cotter, received the honor of being named the "World's Largest Dyngus Day Squirt Gun". "This could explains [sic] why the Cotter is painted red & white," said Marty Biniasz, alluding to the colors of the Polish flag and the Cotter's current livery. "It's only right that The Dyngus Day Capital of the World should have the World's Largest Squirt Gun. We are proud to now make Buffalo's most-loved ship part of our Dyngus Day Buffalo tradition."

Robert F. Kennedy's 1968 appearance was marked by his downtown rally attended by a crowd of over 6,000, his participation in the Dyngus Day parade, and his leading of the crowds at the West Side Democratic Club in the traditional Polish well wishing song Sto Lat (phonetic: 'sto laht') which means "100 years". Indiana was RFK's first primary and first primary victory, which set in motion momentum and victories that may have led to his nomination as the Democratic Party candidate for President had he not been assassinated. 2008 visitors included then – Senators Barack Obama and Hillary Clinton .

Starting in 2004, Rose-Hulman Institute of Technology in Terre Haute, Indiana began celebrating Dyngus Day at the request of South Bend students. The event includes free Polish sausage for students as well as a free concert.

The celebration at the Knights of Columbus hall in Elkhart started around 1980 when two Elkhart men with Polish heritage started the celebration there after seeing its success in South Bend.

Easter Monday is a bank holiday in the United Kingdom. In Leicestershire, England, the people of Hallaton hold a bottle-kicking match and Hare Pie Scramble.

Elsewhere in the world

All content from Kiddle encyclopedia articles (including the article images and facts) can be freely used under Attribution-ShareAlike license, unless stated otherwise. Cite this article:
Easter Monday Facts for Kids. Kiddle Encyclopedia.