Rose–Hulman Institute of Technology (RHIT) is a private college specializing in teaching engineering, mathematics, and science and located in Terre Haute, Indiana. 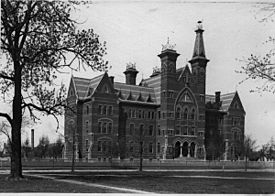 Photograph (circa 1881) of the original main campus building at 13th and Locust.

Founder Chauncey Rose, along with nine friends, created the Terre Haute School of Industrial Science in 1874 to provide technical training after encountering difficulties in local engineer availability during construction of his railroads. Mr. Rose donated the land on 13th and Locust St. and the majority of the funds needed to start the new school. A year later, the cornerstone of the new institution was laid and the name was changed to Rose Polytechnic Institute despite the objections of the president of the board of managers and chief benefactor, Mr. Rose. The original campus was a single building, with no dormitories or recreational facilities.

The first class of 48 students entered in 1883, chosen from 58 applicants. Of the 48 students, all were male, and 37 came from Indiana. All but four students chose to major in Mechanical Engineering with Civil Engineering and Chemistry the only other majors. Nearly half of the original students would eventually quit their studies before graduation for several reasons, including poor grades or conduct. The first president was Charles O. Thompson, who modeled the education of Rose Poly after eastern institutions. Rose Poly was thus founded as the first private engineering college west of the Alleghenies.

During the beginning years of the school, money was a major concern. Many faculty and staff accepted pay cuts to stay at the institution.

In 1889 the school awarded what it considers to be the first Chemical Engineering degree in the country.

In 1917, the school, having grown to more than 300 students, moved from 13th and Locust Street to a new site consisting of 123 acres (0.50 km2) of farmland east of town, donated by the Hulman family of Terre Haute. The old location was used continually by the Vigo County School District from 1922 to 2013; as of 2020 the Terre Haute Boys & Girls Club occupies the site. The cornerstone of the new campus was laid in 1922. The new campus consisted of an academic building (now known as Moench Hall) and the institute's first dorm, Deming Hall, both of which are still in use today.

Early life at Rose consisted of social fraternities, athletics, and the occasional "high jinks." A popular "high jinks" involved the sophomore class inviting the freshmen class to a baseball game but were told to "leave their pipes with the nurse." The freshmen would produce the pipes at a specific time and a brawl would ensue.

During World War I, Rose Poly trained students in technical subjects like vehicle maintenance and created an ROTC Engineer unit which later became the Wabash Battalion Army ROTC program. During World War II the ROTC unit was replaced with an Army Specialized Training Unit and students could enter and graduate after every quarter to support the war effort. This enrollment schedule continued through the post-war years until 1951. A tank was located behind the north sides of Moench Hall and Myers Hall as a reminder of Rose Poly's war contributions, but has recently been moved from the campus for reasons unknown.

In recognition of the Hulman family's significant contributions and continued financial support, Rose Polytechnic was renamed Rose-Hulman Institute of Technology in 1971.

During the 1960s and 70s, growth accelerated under president John A. Logan. Five new residence halls, a new student union, library, and a student recreation center were all constructed between 1963 and 1976. Permission was sought and received to increase the student population to 1000.

The quarterly cryptology journal Cryptologia was founded and published at RHIT from 1977 to 1995, at which time it was moved to the United States Military Academy.

For most of its history, Rose-Hulman was a men's only institution. It voted to become coeducational in 1991, with the first full-time women students starting in 1995. Also in 1995, the college required all incoming freshmen to purchase laptop computers, becoming one of the first schools to do so.

In the decade following 1995, Rose-Hulman's growth was aided by a major fundraising campaign called "Vision to be the Best." Originally a $100 million campaign over ten years, it met its goal in half the time. The goal was extended to $200 million, and by the end of the campaign in June 2004, over $250 million had been raised. In 2002, Hatfield Hall, a state-of-the-art theater and alumni center was opened. Five years earlier Shook Field House was replaced with the $20 million Sports and Recreation Center, which is a major reason that the National Football League's Indianapolis Colts used the campus for their summer training camp from 1999–2010.

After the 2004 retirement of institute president Samuel Hulbert, who had led the school since 1976, the college faced a leadership crisis. Soon after John J. Midgley arrived as the new president, rumors of conflict between Midgley and the administration started to circulate. Students, some wearing T-shirts proclaiming "Hit the Road Jack," held a rally calling for Midgley's resignation. Midgley resigned as president of the institute on June 11, 2005, less than a year into his presidency, after the faculty, staff, and Student Government Association approved votes of no confidence. During the succeeding academic year, Robert Bright, the Chairman of the Board of Trustees, served as interim chief executive officer.

At a press conference on March 17, 2006, Bright named Gerald Jakubowski, Vice President and Professor of Engineering at Arizona State University, as the thirteenth president of the Institute. Jakubowski took over effective July 1, 2006. On February 23, 2009, Jakubowski announced that he would be resigning from the position of president, effective June 30.

On June 11, 2009, the college announced that the Board of Trustees had elected Matt Branam to serve as interim president. On December 4, 2009, the Board elected Branam as permanent president. In April 2012, Branam suffered a heart attack and was rushed to a hospital where he died shortly afterward. The cabinet subsequently selected Robert A. Coons as the Institute's Interim President.

On November 7, 2018, the school announced the resignation of their President, James C. Conwell and appointed Senior Vice President Rob Coons to serve as acting president. 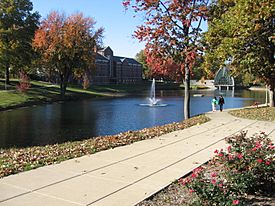 A view of Percopo Hall (left) and White Chapel. 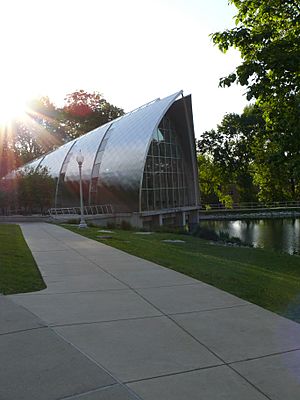 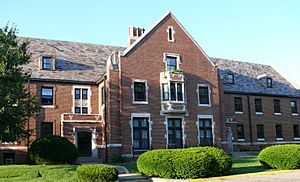 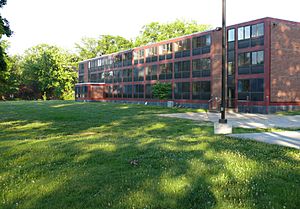 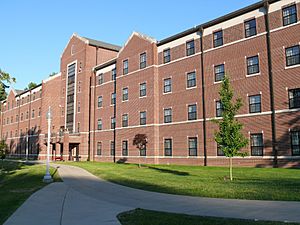 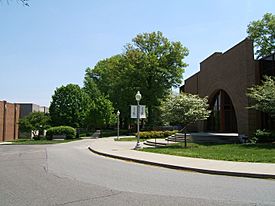 The curricula at RHIT concentrate on engineering and the natural sciences. The school's primary focus is undergraduate education, though there is a small graduate program for master's degree students. There are no doctoral programs. In 2005, Rose-Hulman had 161 faculty members, 99% of whom held a PhD. The current student-to-faculty ratio is 13:1. Admission to the institute remains competitive due to its self-selecting admissions class and applicant sharing with Purdue, and other top universities. In 2015, 547 freshman students enrolled out of 4,331 applicants. The school currently operates on three academic quarters plus an optional summer session.

Rose-Hulman is a member of the College Consortium of Western Indiana. This membership allows students who are full-time at their home institution to take classes at the other member institutions of Indiana State University and Saint Mary-of-the-Woods College.

In addition to institutional membership in the American Society for Engineering Education, the Institute is also a member of the Association of Independent Technological Universities, a group formed to further the interests of private engineering schools.

As of 2018, the institute has been ranked #1 among engineering colleges that do not offer a doctorate degree by U.S. News & World Report for 21 consecutive years. Each individual program assessed has also been ranked first since the magazine has published individual rankings. These programs are the Chemical, Civil, Computer, Electrical, Mechanical, and Biomedical Engineering programs (Biomedical Engineering programs have only received assessment in the 2015 rankings).

The student body tends to come mostly from the Midwest United States, though as the school has gained prominence it has gradually attracted a more geographically and ethnically diverse applicant pool. 39% of students hail from the state of Indiana with large numbers of students from the nearby states of Illinois, Ohio, Michigan and Minnesota.

The school has several competition teams that operate out of the Branam Innovation Center. They compete in collegiate series such as Formula SAE, Shell Eco-Marathon, Human Powered Vehicle Challenge, AIAA Design/Build/Fly, Chem-E-Car and various robotics competitions among many others.

There are eight social fraternities and three social sororities, some of which have their houses on campus. The fraternities are: Alpha Tau Omega, Delta Sigma Phi, Lambda Chi Alpha, Phi Gamma Delta, Pi Kappa Alpha, Sigma Nu, Theta Xi, and Triangle. The sororities are Delta Delta Delta, Chi Omega, and Alpha Omicron Pi. As of 2003, nearly 69% of the students were members of Greek social organizations.

The Homework Hotline provides free homework help and tutoring to Indiana middle school and high school students. The program started in 1991 and is funded by the Lilly Endowment, Inc. and Rose-Hulman Institute of Technology.

The team's sports teams are called the Rose–Hulman Fightin' Engineers.

It is performed by the Pep Band and sung only at football and basketball games after a victory.

The school is served by an independently-funded, student-run newspaper, The Rose Thorn, that focuses on campus news.

The campus radio station was WMHD-FM 90.7 FM, "The Monkey." The station originally broadcast with a very low power transmitter and antenna located on campus, but later operated with an off-site transmitter at 1400 watts. The studio facilities for the station were in the basement of the BSB residence hall. The station was operated entirely by student volunteers, and all disc-jockeys choose their own format and playlists. In August 2014, the station was sold to Indiana State University.

All content from Kiddle encyclopedia articles (including the article images and facts) can be freely used under Attribution-ShareAlike license, unless stated otherwise. Cite this article:
Rose–Hulman Institute of Technology Facts for Kids. Kiddle Encyclopedia.