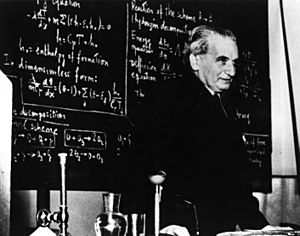 The National Medal of Science is an honor given by the President of the United States. It is awarded to people in science and engineering who did important work in behavioral and social sciences, biology, chemistry, engineering, mathematics and physics.

The National Medal of Science was made on August 25, 1959, by an act of the Congress of the United States. The medal was to be to honor scientists in the fields of the "physical, biological, mathematical or engineering sciences".

All content from Kiddle encyclopedia articles (including the article images and facts) can be freely used under Attribution-ShareAlike license, unless stated otherwise. Cite this article:
National Medal of Science Facts for Kids. Kiddle Encyclopedia.